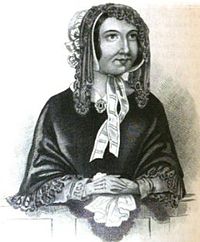 At 3 Miniver Place, Bermondsey, police find the body of Patrick O'Connor buried in quick-lime beneath a newly-laid flagstone in the kitchen. Missing a week, the customs clerk and small-time usurer had been a frequent caller at this address, the now vacant home of Frederick and Maria Manning. O'Connor lies face down, his skull bashed in, his legs tied up to his haunches, his features decomposed. Identification is made only by his "less perishable features of an extremely prominent chin and false teeth."

According to neighbors, O'Connor had been openly romancing Mrs. Manning with her stolid husband's apparent approval.  Then, the Mannings suddenly sold up and left. The discovery of O'Connor's body was called "The Bermondsey Horror" and police put out a description of the missing couple on the telegraph to all ports and railway stations. Within four days, Mrs. Manning is found in Edinburgh. The Times notes with especial glee that she was reading their account of the crime when "the messenger of justice interrupted her studies." A week later, her husband was nabbed on the isle of Jersey.

Manning is a former-railway guard sacked for theft.  Mrs. Manning (pictured) was Swiss-born and a woman of "great personal beauty" who had served as a ladies maid in several aristocratic homes. At the Old Bailey, the crowded court was not cheated of excitement. Frederick's counsel made the startling claim that Maria had been the killer and he merely her "dupe and instrument." Maria's lawyer rose to condemn his fellow barrister, "God forbid that I should pursue that course." The trial is brief, the evidence strong, and the verdict certain. Frederick chose to make no final statement, but Maria - who refused to look at her husband throughout - proclaimed that O'Connor was "more to me than my husband" and Frederick had killed him in a jealous rage.

The Mannings hanged before 30,000 people in Horsemonger Lane. Frederick appeared badly shaken, while Maria walked to her fate with "firm, unfaltering step." Dickens, who watched the double hanging, wrote The Times: "I believe that a sight so inconceivably awful as the wickedness and levity of the immense crowd ... could be imagined by no man, and could be presented in no heathen land under the sun. Thousands upon thousands of upturned faces, so inexpressibly odious in their brutal mirth or callousness, that a man had cause to feel ashamed of the shape he wore."
Posted by Tom Hughes at 3:10 AM