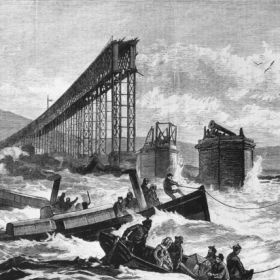 In a howling gale off the North Sea, a 3000 foot span of the Tay Bridge collapses, plunging the Edinburgh Mail train into the icy waters of the Firth.

The northbound train had gone on to the bridge, passing the signalmen's shack at 7:14, on a Sunday evening. Minutes later, eyewitnesses see the lights of the train, amidst a shower of sparks, descending into the blackness of the roiling waters, 90-feet below. Word that "the bridge is doon" spreads quickly along the riverside but little can be done. Rescue boats brave horrific sea conditions in a vain search for survivors, finding only bodies and debris. Not all in vain, the North British Railway had placed a £5 bounty on any recovered body. The exact death toll will never be known, but it numbers at least 90.

The two mile long bridge, just south of Dundee, had only been opened eighteen months before, replacing the world's first train ferry. The Queen - who had been present to dedicate the new structure - wires immediately for all details on such "an appalling tragedy." The Times notes that the accident combines the risks of rail and sea and "seems to multiply terribly and unexpectedly the vicissitudes of life."

Sad stories fill the papers; the most touching, perhaps, that of a young man visiting his fiancee who had thought the weather too bad for travel; his lover, however, urged him to return to Aberdeen rather than "break faith with his employer." Sabbatarian zealots suggest divine retribution for travel on the Lord's Day but Punch condemned them for "converting the awful catastrophe... to their own black and bitter creed."

In the end, the blame fell on the bridge's designer, Sir Thomas Bouch, who'd been knighted by the Queen upon completion of the project. When he came to view the wreckage, an angry crowd kept him a virtual prisoner in his hotel. A Parliamentary review committee concluded the bridge had been "badly designed, badly constructed and badly maintained." Modern structural engineers blame Sir Thomas for miscalculating the maximum windloads that could be expected in such an exposed setting. Sir Thomas had already begun working on the even more ambitious plans to bridge the Firth of Forth but was immediately removed from the project team. Ten months after the Tay Bridge disaster, he was dead, his reputation and health ruined.

The disaster was remembered by the man called "the World's Worst Poet," the Scot, William McGonagall.  In (merciful) part, he wrote:

So the train moved slowly along the Bridge of Tay,
Until it was about midway.
Then the central girders with a crash gave way,
And down went the train and passengers into the Tay.

The Tay Bridge was rebuilt by 1887, using much of the materials salvaged from the wreckage.
Posted by Tom Hughes at 4:47 AM