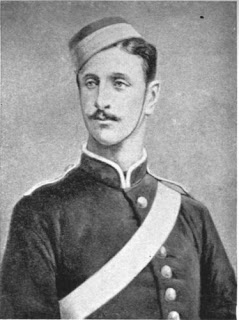 As for Lt. Carey, the Duke of Cambridge, Commander-in-Chief, demanded "the most searching investigation to satisfy the world, both at home and abroad, that [the Prince] was not abandoned to his fate by the officer and men who were with him." Carey was at first treated sympathetically, but eventually court-martialed and found guilty of misbehavior in the face of the enemy. A damning piece of evidence was his own letter to his wife, written shortly after the attack: "I am a ruined man I fear ... but it might have been my fate." The Empress asked that the charges be dropped, which they were, but Carey was indeed ruined. Shunned by most, he yet remained in uniform, serving in India until his death in 1885.
Posted by Tom Hughes at 12:00 PM