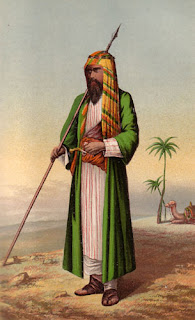 Captain Richard Burton arrives in forbidden Mecca, holiest city of Islam, the birthplace of Mohammed. Sponsored by the Royal Geographical Society, Burton spent months in preparation; he stained his skin with walnut juice and even underwent a painful adult circumcision.

In August, traveling as "Abdullah, originally of Kabul," Burton arrived in Medina, where The Prophet is buried. He joined a caravan of several thousand pilgrims. The two week trek across the scalding desert featured attacks by marauding tribesman and fighting among the pilgrims themselves. (After one such melee, a wounded man was buried alive, a fate which horrified even the hardened Burton.)

Finally, they reach Mecca. The city is home to the Great Mosque, site of the Ka'aba, the very center of Islam, the "navel of the world." Burton, in his Narrative of a Pilgrimage wrote: "I may truly say that, of all the worshippers... none felt for the moment a deeper emotion than did the Haji from the farNorth ... But, to confess humbling truth, theirs was the high feeling of religious enthusiasm, mine was the ecstasy of gratified pride."

Burton defended the mysterious rituals of Islam, asking, "What nation, either in the West or the East, has been able to cast out from its ceremonies every suspicion of its old idolatry?" In the high point of any Muslim's haj, the chance to appraoch and kiss the sacred rock - the Ka'aba - Burton used a hidden tape to measure the stone, sketching details on his holy garments. He remained in the city for six days, knowing that "nothing could preserve him from the ready knives of enraged fanatics if detected."

Finally, via Jeddah, he returned to Cairo. Still in disguise, he brushed against a British officer, drawing the rebuke, "Damn that n****r's impudence." Burton quickly identified himself, greeted by the now startled officer, "By God, it's Ruffian Dick!"
Posted by Tom Hughes at 2:33 PM