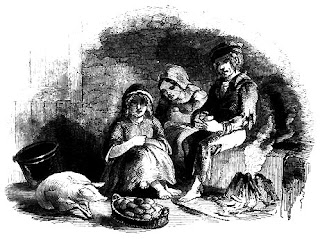 The Gardiner's Chronicle and Horticultural Gazette, the leading weekly on agriculture, holds the presses for troubling news from Ireland: "With very great regret [we] announce that the potato Murrain has spread to Ireland. The crop about Dublin are suddenly perishing."

The blight - officially defined as phytophthora infestans - had already been reported on the Isle of Wight and in Kent, but in Ireland, with so much of the population dependent on the potato almost exclusively, the crisis is more desperate. Prime Minister Peel's initial reaction is scepticism, reminding his Cabinet that reports out of Ireland have "a tendency to exaggeration and inaccuracy." However, Dr. John Lindley of the University of London, editor of Gardiner's, returned from Ireland in mid-November to report to Whitehall that half the crop was either destroyed or unfit for human consumption, adding "we fear this to be a low estimate." Cruelly, in many areas, potatoes are dug out of the ground in seemingly perfect condition; yet, within days, they rot into a black, putrid mass, "having each the appearance of a running sore or cancer."

What had gone wrong? The smoke from the new railroads is blamed by some, others suggest it might be the recently fashionable guano manure used as fertilizer. In the House of Commons, the Irish leader, Mr. O'Connell, plead for food and financial aid: "Famine is coming, fever is coming and this House should place in the hands of the Government power to stay the evil." Mr. Peel, now convinced the crisis is real, responded: "The remedy is the removal of all impediments to the import of all kinds of human food."

The ancient Corn Laws, which set high tariffs on all food imports to keep crop prices and land values artificially high at home, were the sacred cow of Tory politics. Peel's decision to seek their repeal rent his party. He got his way but was turned out of office never to serve Her Majesty again.  In the words of Wellington: "Rotten potatoes have done it all; they have put Peel in his damned fright."
Posted by Tom Hughes at 2:41 PM