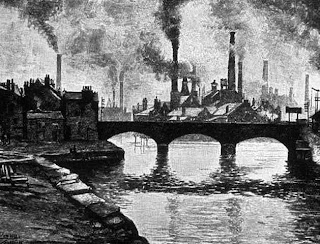 What might be called England's first "air quality" act takes effect; "A Bill for the Abridgement of the Smoke Nuisance in the Metropolis."

London's grimy pall had become infamous. In 1819, Shelley wrote, "Hell is a city much like London, a smoky, populous city." Commenting on the frequent cleaning required for the capitol's buildings and monuments, a leader writer in The Times declared, "Shocking as it may sound, London is a n****r metropolis." In Bleak House, written just the year previous, Dickens' narrator watched the "smoke lowering down from chimney-pots, making a soft black drizzle, with flakes of soot in it as big as full-grown snowflakes."

But, while the poets and the plutocrats might make periodic forays to seek the healthier airs of countryside or Continent, the great mass of Londoners lived out their (often shortened) lives, wheezing beneath the constant sooty sky. Industrial interests strongly fought the new law; one London manufacturer boasted to a Parliamentary committee, "I believe, for the last thirty years, no person has been out of London as little as myself, and I enjoy the most perfect health." They argued that the bill would simply drive industry from the cities, despoiling new areas of "this green and pleasant land." In closing debate, however, Lord Palmerston told an alternately cheering and jeering Commons, that only "100 gentleman" oppose the bill; "a small combination of men set up against the material interests, physical enjoyment, the health and comfort of upwards of 2,000,000 of their fellow men."

The law is really quite limited in scope, requiring only that all furnaces (in mills, factories, breweries, etc.) consume their own smoke "or as far as possible." Fines are low, a mere £5 for the first offense. The law was amended and its coverage extended beyond London, to the "Black Country," and even Scotland.  many times. Fines were increased. Still, there was little progress in the Victorian era.  The Lancet in 1900 objected to the presentation of the problem as a mere "nuisance."  The word, the medical journal declared, "conveys but the feeblest impression of the real state of affairs."

Illustration from scienceblogs.com
Posted by Tom Hughes at 10:24 AM