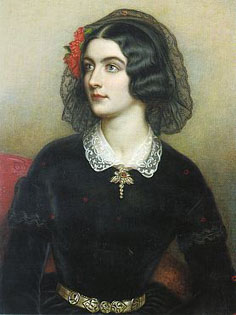 On the arm of her young husband of but three weeks, the infamous Lola Montez surrenders at Marylebone Police Court to answer a charge of bigamy.

In July, Lola had married Lt. George Heald, of the 2nd Life Guards (At Prince Albert's urging, he was promptly expelled from the regiment). Born Eliza Gilbert in Limerick in 1818, Lola's lovers had included an array of noblemen and artists, including Franz Lizst. Most recently, she had been mistress to old King Ludwig of Bavaria, who rewarded her with a peerage, the Countess Landsfelt. His extravagance on her behalf soon prompted a rebellion (students chanted "Perish the whore!") and Ludwig's abdication.

Once in London, she soon latched on to the 20-year old Heald and his considerable expectations of £7000 a year. Clubland wits riddled: Why is a certain young officer like a shoe? Because he is "Heald" and "sold." The bigamy charge is pressed by the lieutenant's spinster aunt and guardian, Susanna Heald.  Auntie's goal is to "remove this deluded young man from the fangs of this woman." She charges that Lola is still legally married to an officer in the Indian Army, with whom she eloped in 1837. Lola calls the charge "rubbish" and tells the magistrate, "I don't know whether Capt. James is alive or not and I don't care." While the lawyers argued, Heald stood by Lola's side, "with the Countess's hand clasped in his, occasionally giving it a fervent squeeze." The newlyweds are freed on bail.

Within days however, The Times published evidence confirming the previous marriage. The Healds failed to appear at their next hearing, their discomfited counsel explaining "a precipitate journey to France was necessary for the benefit of her health." Alas, the romance waned. By November, they had separated. In Barcelona, Lola went after her husband with a knife and Heald, "objecting to such a display of conjugal affection, promptly quitted the town."

A rather demure portrait of Lola painted pre-bigamy by Joseph Karl (1847).
Posted by Tom Hughes at 8:30 AM