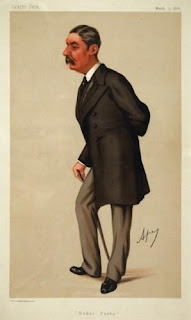 Col. Valentine Baker of the prestigious 10th Hussars is tried for assaulting a governess aboard a London-bound train. Baker is 50 years old, married with a daughter and his brother is Sir Samuel Baker, the noted African explorer. The Colonel has an unsullied record and many powerful friends, including the Prince of Wales. The crush to get in to the small courtroom in Croydon is tremendous.

22-year old Miss Rebecca "Kate" Dickinson tells the court that she had been alone in her 1st-class carriage until Baker boarded in Liphook. It was a slow-moving local train and they chatted for some time about military life, the theatre, even mesmerism.  As the train left Woking, she says Baker suddenly became amorous. Moving beside her, he cooed, "You must kiss me, darling." She resisted, unsuccessfully, "He kissed me on the lips many times. His body was on me." Feeling his hand beneath her dress, she fought free and stepped outside the carriage, shrieking for help whilst hanging on to the footboards until the train was stopped at Esher where her story led to the Colonel's arrest. It was said by witnesses that his trousers were "disarranged."

The Prince arranged for the finest defense lawyers in London but Miss Dickinson's version of the event goes unchallenged. Baker refuses to allow his counsel to cross-examine her. Baker's counsel says the Colonel, "as a British officer and a gentleman," offers no defense, simply his "unqualified regret."  He also declares that Miss Dickinson has acted "under the influence of exaggerated fear and alarm."

Baker is acquitted of the serious charge of "attempt to ravish" but found guilty of assault and sentenced to a year in the Horsemonger Lane jail. Justice Brett, to the cheers of many, denounces the "libertine outrage," and denies the implication that at worst a playful kiss had been exchanged, "A kiss that gratifies or excites passion is undoubtedly indecent." He praises Miss Dickinson's courage which adds "a new ray of glory to her youth, her innocence and her-beauty."

Col. Baker's disgrace is complete; at the Queen's command, he was publicly cashiered from the Hussars. Upon his release from jail, he entered the imperial service, dying of fever while an advisor to the Egyptian police force.

Caricature from Vanity Fair
Posted by Tom Hughes at 10:42 AM