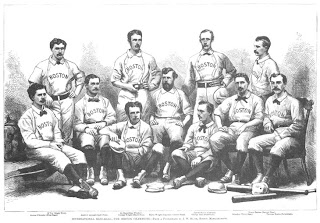 A Bank holiday crowd of some 6000 people is on hand at Lord's Cricket Ground for their first look at American baseball. The Boston Red Stockings easily handled the Philadelphia Athletics by the score of 24-7.  The winning team is managed by the native Yorkshireman and future Hall-of-Famer Harry Wright.

It was a sloppily played affair and the London press finds the American game mystifying. The Times observer called it "somewhat disappointing," and criticised the Philadelphia team for its lackluster play, "of which their opponents took most judicious advantage." In The Illustrated London News, the reporter was more appreciative: "The fielding of the men is extremely smart and good, and they show great powers of hitting, considering the awkward shape of the bats." However, the reporter concluded, "We doubt if baseball - some of the rules of which are extremely complicated - will find much favor in this country." The Standard compared baseball to the old English game of "rounders." The correspondent expressed unusual interest in the player known to Americans as "the catcher."  This player, readers were told, "stands behind the striker, and who acts pretty much as a wicket-keeper in cricket, except that he appears to be considerably more in danger of the striker's club than of the ball, which is not a very formidable looking article."

Yankee proponents of the game are happy to note that a baseball contest is over in little more than two hours, an improvement over cricket where important matches can extend into a second day. The Times sniffs: "Americans, who are so busy that they cannot find leisure for cricket, managed to find it for a game which a single afternoon is sufficient to decide." The day ends with a dinner at the host Marylebone Cricket Club.

As an audition for the game, the 1874 visit was a flop.  Baseball would not return to England until 1889, when the Prince of Wales attended a game between touring all-star teams at London's Kennington Oval, and got to meet the players, including another future Hall-of-Famer Cap Anson. The New York Times noted that the ballplayers were "delighted at the urbanity displayed by the Prince."