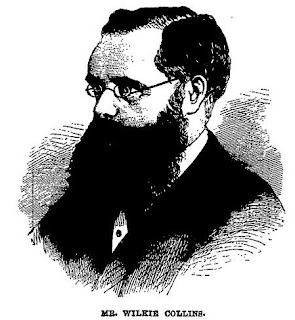 The final installment of Wilkie Collins' Classic mystery, The Moonstone, appears in All the Year Round, a weekly edited by the author's great friend, Charles Dickens.

Large crowds had gathered each week at the magazine's offices for the latest installment in the tale of the disappearance of the fabulous yellow diamond and the sinister forces conspiring to recover it. More than a few bets were taken on the solution to the mystery.

Modern critics have actually been kinder to Collins than his contemporaries. Dorothy Sayers, creator of the aristocratic sleuth Lord Peter Wimsey, calls Moonstone, which introduces the plodding rose-loving Sergeant Cuff, "probably the very finest detective story ever written." T.S. Eliot proclaimed it "the first, the longest, and the best of modern detective stories." Yet, in 1868, the critic in The Pall Mall Gazette, who had wearied of "sensation" novels with more puzzle than plot, groaned, "Is this, then, what fiction has come to?" The public. however, was less jaded.  Sales of the weekly soared and the hardbound edition quickly went into a second printing.

Collins' achievement is the more remarkable when considering his private life. While he was writing the novel, his lost his mother and collapsed himself with the gout. Only by treating himself with massive doses of opium, did he never miss a deadline. Interestingly, the denouement of the story involves an experiment in which a character doses himself with opium. Guilty of "writing-under-the-influence," Collins told a friend, "When it was finished, I was not only pleased and astonished at the finale, but did not recognize it as my own!"

The Moonstone was the apogee of Collins career. As his popularity waned, he increasingly relied on his drugs, drinking laudanum by the wineglass. He died in 1889; a recluse, haunted by phantoms, he rarely left home, taking exercise dragging himself up and down stairs.

A sketch that appeared in the Penny Illustrated Paper in 1868.
Posted by Tom Hughes at 9:02 AM