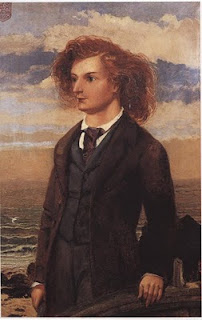 One of the most famous of all bad reviews sends its victim into a fit of madness on the streets of Mayfair. Whilst strolling down Dover Street with his publisher, Algernon Swinburne stops into a bookshop to purchase that day's Saturday Review.  The influential weekly is to review his new collection, Poems and Ballads.

Reading the magazine at first silently, Swinburne suddenly is literally dancing in anger and shrieking profanity. His companion drags him into a restaurant, all the while urging him to swear in French so as confuse his audience. Nothing can calm Swinburne and he's soon asked to leave the establishment. The critic has dismissed Swinburne's effort as something "a professional vendor of filthy prints might blush to sell if he only knew what they meant."

The 29-year old Swinburne's collection celebrates everything from lesbian cannibalism to medieval necrophilia, amid heavy doses of sado-masochism, or as the reviewer calls them, "nameless shameless abominations." A sample:


Ah that my lips were tuneless lips, but pressed
to the bruised blossom of thy scourged white breast

The review is unsigned but it is certainly the work of the editor John Morley, who had known the poet at Oxford. The critic [Morley] labels Swinburne "the libidinous laureate of a pack of satyrs ... [who] has revealed to the world a mind all aflame with the feverish carnality of a schoolboy." Nor was Saturday Review alone; The Athenaeum declared that Swinburne was "unclean for the sake of uncleaness." Punch even took a playful jab at the man they dubbed "Swine-born." The Times was prepared to call for both the poet and the publisher to be prosecuted under the obscenity laws. Swinburne's publisher withdrew the work the very next day.

Swinburne found a new publisher, the infamous John Hotten, whose speciality was "erotica" of all types, including works of the "flagellation" school, a special interest of his newest author. Only a few literary men stood by Swinburne; Ruskin, among them, wrote. "All I can say ... is that God made you, and that you are very wonderful and beautiful."

When Swinburne heard rumors that Carlyle had made unfavorable remarks about the work, he was outraged.  He wrote the aging Scot, "Could the private parts even of a prostitute rotted with disease ever be fouler than your tongue?"

It was five years before Swinburne's next major collection was published.

A painting of the poet by William Bell Scott
Posted by Tom Hughes at 12:53 PM