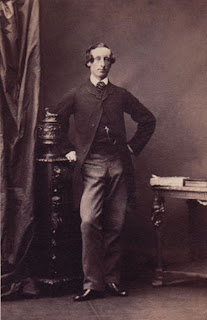 After ten days of frequently disgraceful testimony, Sir Charles Mordaunt (left) is denied his requested divorce. The highlight of the trial - certainly for the scandal-seeking public - had been the seven minute appearance in the witness box of the Prince of Wales. Appearing decidedly uncomfortable, the Prince denies any impropriety in his relationship with the beautiful, but sadly now quite mad, Lady Harriet Mordaunt.

The Mordaunts had been members of the "Marlborough House Set," so-named for the Prince's London home. Lady Harriet had been frequently unfaithful.   The birth of her first child had been extremely difficult; worse when doctors feared the infant would be blind.  Lady Harriet, whether from panic or madness, went to her husband and confessed everything.  Her lovers had included Sir Frederick "Freddy" Johnstone, one the Prince's best friends.  The gossip in London was that Freddy suffered from a disease which would be passed on to any of his children. Lady Harriet soon became totally deranged and had to be sent to an asylum.

Johnstone, Lord Cole, and others were named in the divorce suit but NOT the Prince.  Still, Bertie's "friendship" with Lady Mordaunt is well known.  In Divorce Court, the Prince admits to writing letters to Lady Mordaunt, including one thanking her for her "very pretty muffetees."  Indeed.  Mordaunt servants had already testified that the Prince made many calls at 6 Chesham Place to visit her ladyship whilst the inattentive Sir Charles was away.  Asked if he and Lady Harriet had been lovers, the Prince answered firmly, "No, never."

Cheered as he left the court, the Prince's public reputation was nonetheless tarnished. He complained about "gross imputations" in the press; the unfriendly Reynolds Newspaper wonders whether the Queen's successor will have "the tact and talent to keep royalty on its legs and out of the gutter." The Queen was equally displeased. She thought her son's attendance upon a young married woman showed "an amount of imprudence which cannot but damage him in the eyes of the middle and lower classes, which is to be most deeply lamented." For weeks after the trial, the Princess of Wales received sympathetic cheers in her public appearances, while the Prince was frequently hissed.

Yet, Sir Charles is the big loser. Due to his wife's insanity, his divorce plea was denied and it would not be until 1875, after lengthy appeals and with his wife still committed, that he would be granted his divorce.

(Photograph at Mordaunt.me.uk)
Posted by Tom Hughes at 5:00 AM