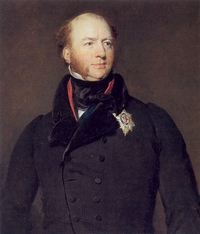 One of the last of the Regency rakes, Francis Charles Seymour-Conway, third Marquis of Hertford, dies, at Dorchester House, Park Lane.

Near 65 at his death, Hertford had lived a life of what the diarist Charles Greville called "undisguised debauchery." In fact, he passed away only days after a whorish orgy at an inn in Richmond. He lived openly with the former maid of his ex-mistress. According to Greville, the mistress (one Lady Strachan) left the Marquis once "his habits became ... so ostentatiously crapulous that her residence in his house ceased to be compatible with common decency."  Hertford's valet, Nicholas Suisse, was both pimp and procurer, supplying the aging satyr with young people of both sexes. In his final years, Hertford was grossly fat, swollen with gout, infected with venereal disease and given to slurred, foul speech.


"Without a serious thought or kindly feeling, lavishing sums incalculable on the worthless objects of his pleasures, never-doing a generous or charitable action, caring and cared for by no human being [he was] surrounded to the last by a venal harem who pandered to [his] disgusting exigencies."

Seeing the long line of carriages which followed the Marquis' cortege to the graveyard, including that of, of all people, the abstemious Prime Minister Peel, the Duke of Bedford wrote, "What is this use of character and conduct in this world?"

Hertford survives in Victorian literature, serving as Thackeray's model for the leering Lord Steyne in Vanity Fair, and Disraeli's dissipated Lord Monmouth in his novel Coningsby. The Marquis leaves an estate estimated at £2,000,000, much of it in priceless art. The 4th Marquis and, in turn, his illegitimate son, Sir Richard Wallace, expanded the collection. Considered one of the world's finest private art collections, it is now on public display at Hertford House, London. The family's official biographer concedes that long dead collector had lived "engulfed in a swirl of nauseating pleasures," but reminds us "When we feast our-eyes at the Wallace Collection, we must not forget that we owe much of our pleasure to the 3rd Marquis of Hertford.'
Posted by Tom Hughes at 6:23 AM