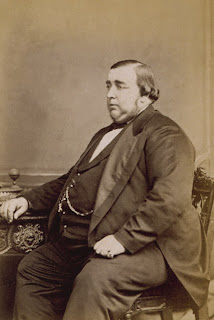 Ending seven years of legal wrangling and following a ten-month trial (still England's longest), the infamous Tichborne Claimant is found guilty of perjury and sentenced to 14 years in jail. The Pall Mall Gazette argued for the noose.  The Daily Telegraph noted: "It seems at first sight wonderful that the Tichborne Claimant should ever have found a single adherent or follower."

All Britain had suffered from "Tichbornitis", fiercely arguing whether the man was "butcher or Baronet."  From our standpoint in the post-DNA world, the claim appears ludicrous. The background: Sir Roger Tichborne was lost at sea off South America in 1854. His mother persisted in hope, advertizing around the world for news of her son. In 1866, a man claiming to be Sir Roger arrived from Wagga Wagga, Australia, and Lady Tichborne - to the amazement of her incredulous family -- accepted him as the son she hadn't seen in a dozen years. Guardians of the Tichborne estate did not and a suit in Chancery was begun in 1867.

In March, 1872, after a 26-day(!) closing statement from the Attorney-General, a jury found against the Claimant, who was promptly indicted for perjury.  The second great trial began in April 1873, covering now well familiar territory.  Was the Claimant really a Wapping butcher's son born Arthur Orton? While steeped in Tichborne lore, the Claimant bore only the slightest physical resemblance to Sir Roger and was missing a documented tattoo. Further, despite Roger's public school education, the Claimant could not tell Latin
from Greek.

Pity the jurors. The Claimant's counsel took six weeks to sum up his case, the prosecution took two weeks and Chief Justice Cockburn's jury charge consumed the entire month of February. After all that, the exasperated jury takes less than a day to find that the Claimant had indeed falsely sworn.

He was denounced from all sides; The Standard called him "the most audacous rascal that ever devised a scheme to delude a nation," and The Times cheered at the exposure of such a "low-born, illiterate, vulgar scoundrel."

The legal battle had drained the Tichborne estate by £90,000.  Lady Tichborne died before the verdict, still believing her missing son had come home at last.  Orton was freed in 1884.  He became a regular music hall figure, still claiming his inheritance.  He died penniless in 1898.
Posted by Tom Hughes at 5:23 AM