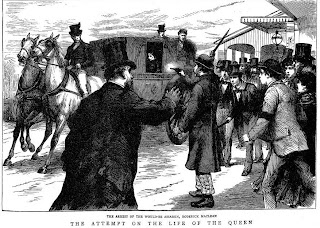 A deranged gunman fires upon Queen Victoria at Windsor railway station. The Queen and her daughter, Princess Beatrice, had just returned by rail from London.  The Queen had just taken a seat in her waiting carriage.  The assailant can get off but one errant shot before he is subdued by an angry crowd, including several boys from nearby Eton. One of the valiant lads pummels the would-be assassin with his umbrella until Inspector Fraser of the Royal Household Police "bade him desist."

The royal carriage is hastily removed from further danger. In fact, although the Queen heard a loud report, she was unaware of the attempt on her life. In her journal, she recalled: No one gave me a sign to lead me to believe anything amiss had happened. [The indispensable John] Brown however, when he opened the carriage, said, with a greatly perturbed face, though quite calm, "That man fired at Your Majesty's carriage."
Safely back at Windsor, she repairs to Prince Albert's mausoleum to offer prayers of thanks.

The "young wretch" is identified as Roderick Maclean, an unemployed grocer's clerk from Portsmouth. A would-be poet, his unsolicited verses to the Queen had been returned unopened. In his pockets, police find not poetry, but a letter in which he raves about, "Those bloated aristocrats ruled by the old lady, Mrs. Vic., who is a licensed robber in all senses." Maclean had spent several years in an asylum after a head injury left him rather witless. In late 1881, his "mad doctors" had declared him cured and ordered his release, although they admitted Maclean remained terrified of the number 4 and anyone wearing blue clothing.

Found not guilty, but insane," Maclean is bundled off back to the asylum. A few days after the shooting, the Queen hosted ceremonies for 900 Etonians in the Castle quadrangle, shaking hands with the boys who helped thrash Maclean. Victoria received thousands of congratulatory messages, several from America where President Garfield had been slain the previous year - ironically, shot down in a railway station.  The Queen noted in her diary, "It is worth being shot at to see how much one is loved."
Posted by Tom Hughes at 6:30 AM