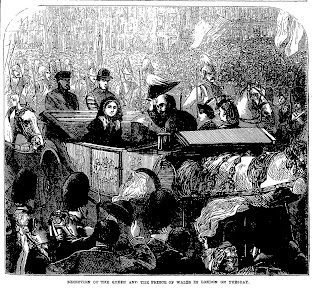 13,000 people squeeze into St. Paul's Cathedral for a service of Thanksgiving in appreciation for the recent recovery of the Prince of Wales from typhoid. Thousands more line the streets for the procession from Buckingham Palace; a great roar is heard when the Queen, at Temple Bar, holds her son's hand aloft and then kisses it.

The Prince had fallen gravely ill in October, sickened by foul drains at Londesborough Lodge in Yorkshire where he'd been visiting. Two other members of the party, including the Prince's groom, had died and the Queen had been told that her Bertie's demise could be expected at any time. Her prayer to "spare my beloved child" was answered. In fact, it was on the very anniversary of Prince Albert's death that his son's fever broke. The Prince emerged from delirium to request a Bass ale.

For almost two months, the recuperating Prince remained secluded at his Norfolk estate at Sandringham. So huge are the crowds to welcome him back to London, that many are injured in the crush and an infant is trampled to death. The watchful Press thought the Prince appeared pale and frail but deeply moved. Writing his mother that evening, Bertie admits being "gratified and touched" by the whole day.

The outpouring of emotion comes amid increasing talk of "Republicanism." The Duke of Cambridge believes the public display of affection for the Royal family proves once again that Britain shall remain "a great and powerful monarchical nation." The Queen, who first feared the celebration would overtire her son and degenerate into "merely a show," thought it all "a wonderful demonstration of loyalty." Her lone quibble was that the great Cathedral, which she rarely visited, appeared "dreary and dingy."

An interesting side issue developed over the many claims that it was the power of prayer which saved the Prince. The leading medical journal Lancet felt the need to respond: "While we recognize the hand of Providence, we still claim for modern medical science that she has signally won fresh laurels in the recovery of the Prince of Wales."

(Sketch from The Penny Illustrated Paper)
Posted by Tom Hughes at 5:15 AM