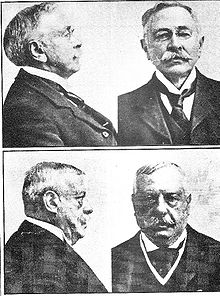 Adolf Beck is sentenced to seven years in prison for defrauding a fashionable London prostitute. While a rather petty crime, the case of Adolf Beck would not be settled for nine years. Over that time, the public was treated to numerous sensational revelations and the British courts would be reformed.

In December, 1895, Mme. Ottiline Meissonier had charged that a gentleman, claiming to be related to Prime Minister Salisbury, invited her to the Riviera. He wrote her a check to purchase a suitable wardrobe and took from her several rings, bracelets, and watches which he said he would exchange for finer pieces. Not surprisingly, he never returned; the check was worthless and Mademoiselle was out her jewelry. Weeks later, on Victoria Street, she spotted Adolf Beck and shouted, "I know you." Beck, to his ultimate regret, ran but could not evade a policeman.

The consequent publicity brought forth 23 other women, all victims of the same ruse, ten of whom identified Beck. Adolf Beck was a Norwegian born adventurer of sorts whose life had included stints as an opera singer in Paris and war profiteer in South America. Shortly after Beck's arrest, Scotland Yard - relying on an anonymous tip - accused him of being the John Smith who was jailed in 1877 for the same scheme.  They had convincing handwriting samples to back the claim. At his trial, Beck vainly insists he had been in Peru in 1877. Protesting his "absolute innocence," Beck is nonetheless found guilty on ten counts.

His lawyer, T.D. Dutton, doggedly pursued the case. In 1900, he found proof that "John Smith" was one Wilhelm Mayer who, although he bore some resemblance to Beck, was a circumcised German Jew. Beck is uncircumcised. In the photo here (of their faces!), Beck is the gentleman at the top; Smith/Mayer below.  Public pressure now coaxed the Home Office to grant Beck a reluctant parole in 1901. Almost immediately, inconceivably, the frauds began anew. Beck was re-arrested and again ID'd as the con man. Only two days before Beck was to stand trial anew, John Smith/WilhelmMayer fell into the clutches of the law at last. He was nicked hocking jewelry at a pawn shop.

In 1904, Beck received a King's pardon and £4000 pounds for his troubles. He was broke and dead within five years. His treatment - and similar cases of suspect verdicts - led to the creation of Britain's first-ever Court of Criminal Appeal.
Posted by Tom Hughes at 7:02 AM