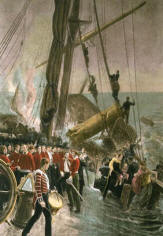 At two in the morning, the troopship HMS Birkenhead - carrying some 630 souls - runs aground three miles off Danger Point, north of Capetown, South Africa.

A hole is torn in her port side below the paddlewheel and the Birkenhead  founders in twenty minutes. Water quickly fills the forward compartments; dozens of sleeping soldiers are drowned in their berths. The ship carries few lifeboats and, of those, only three are fit for use. The women and children, numbering twenty, are put to sea along with as many men as safety will allow. Others try to swim to shore; in the darkness most find only sharks or treacherous reefs of entangling seaweed. There are 194 survivors.

At the inquest, the legend of the Birkenhead begins. A surviving officer, one Capt. Wright, told how the remaining men - tough young Scots from the 74th Highland Regiment - were assembled in formation on deck and advised by their commanders that there was no hope and the best course is to go down with the ship. And 438 men do, remaining - again, according to legend - in their ranks on deck to the last. Said Wright: "Every one did as he was directed, and there was not a murmur or a cry."

The Times declares that there was "something inexpressibly touching" about it all; a public subscription was launched to honor the "matchless chivalry" of the lost troops. The tragic tale of the Birkenhead soon became a fixture in Victorian schoolbooks: young readers learned how the doomed men "stood, as if on parade, no man showing restlessness or fear, though the ship was every moment going down, down." Other survivors who remembered more pathetic scenes of desperate men scrambling over the sides found it hard to win an audience for their version.

Rudyard Kipling was one of several poets who wrote of the wreck, concluding memorably:


To stand and be still to the Birkenhead drill
Is a damn tough bullet to chew.

(The Wreck of the Birkenhead by Thomas Hemy)
Posted by Tom Hughes at 5:09 AM