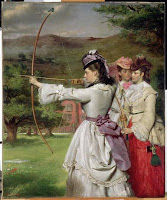 An unusual contest is sponsored by the St. George's Archery Club at Regent's Park.

The participants are members of the Ojibbeway Indian tribe from Canada, who've been touring England. The Indians, at first, find the English bow longer and more flexible than the ones they left at home and somewhat difficult to get used to. But with a little practice, a lively competition ensues.

Following the sport, an elegant dejeuner a la fourchette is laid out for all, including the tribal visitors. The etiquette of the Ojibbeway guests, according to The Times observer, is a "source of infinite amusement for the toxophilites and their guests." The Ojibbeways had proved amusing company throughout their visit. The Spectator, however,  found it debasing the way their promoters encouraged them to "jump and scream before people who they know are laughing at them, all for the sake of gain."

In April, just prior to their return to Canada, The Times, under the heading MARRIAGE EXTRAORDINARY, reported that Nottenakm, the Ojibbeway interpreter (his name means Strong Wind), had proposed to and been accepted by a young lady "of respectable birth." Crowds of the curious gathered at St. Martin-in-the Fields on the morning of the wedding hoping to get a glimpse of "the savage and his squaw." The bride - Sarah Haynes, daughter of a "respectable carver & gilder" - wore white, the groom appeared in full headdress, moccasins and a blue robe "adorned with the most curious needlework." The ceremony was a traditional C-of-E affair; a reporter noted with approval that, at the end, Nottenakm "with much grace, imprinted on the lips of his bride, the hymeneal salute." In early 1845, the English papers carried a brief item from The Detroit Advertizer. A reporter had observed the couple shopping at one of the local stores. "She is a very pretty stylish petite Englishwoman. He is a coarse, awkward, stupid and booby-looking Indian."

The painting: Fair Toxophilites by Frith
Posted by Tom Hughes at 4:18 AM