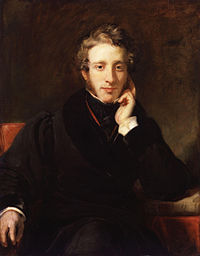 Quietly, ending an embarrassing literary and political scandal, Lady Rosina Bulwer Lytton leaves a London mental asylum in the company of her son.

Of all the ill-starred marriages of 19th Century writers - Dickens, Thackeray and Meredith are only the best known - that of Edward and Rosina Bulwer Lytton may lay claim to be the most disastrous. Lord Lytton (left) was a novelist whose works included The Last Days of Pompeii and Paul Clifford (infamous for the opening line, "It was a dark and stormy night.")  He had separated from Rosina amid unusual bitterness in 1836. Described by an unfriendly observer as "a woman of genius enclosed by misadventure in a man's form," Bulwer Lytton was notoriously unfaithful and very likely a wife-beater. Rosina was no doubt unbalanced, given to hysterical public scenes.

In the separation, her children were taken from her and she spent several years exiled in France. Lytton turned his attention from writing to politics, winning a seat in the Commons and a minor post in a Tory government headed by Lord Derby. Then, Rosina returned to England. She launched a campaign of harassment: obscene letters (at times 20 a day) were sent to his clubs and colleagues, threats to sneak in to a benefit performance of a new Lytton play and pelt the Queen with eggs (guards were posted) and finally, in 1858, she appeared at a rally in Lytton's constituency and denounced him as a liar and a scoundrel who deserved to be transported to the Antipodes.

Rosina was lured to a "peace conference" to discuss a new separation agreement but she was instead bundled off to an asylum in mid-May where she found herself attended by a large "keeper." Despite considerable evidence of Rosina's unsound mind, The Daily Telegraph , to embarrass the Tories, accused Lytton of "hushing up [a] monstrous scandal." In the pro-Tory Times, young Robert Lytton promises to take his mother out of the country, explains: "This painful matter has been arranged, as it ought to be, by the
members of the family whom it exclusively regards."

Lady Rosina spent her remaining years in exile, outliving her husband. At her death in 1882, few mourn. Her grave in Shirley remains unmarked, despite her wish that her tombstone read: "The Lord shall give thee rest from thy sorrow, and from thy fear, and from the hard bondage wherein thou wart made to serve."
Posted by Tom Hughes at 9:43 AM