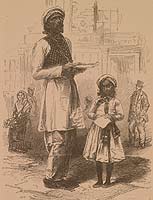 The Lord Mayor calls it the "most horrible piece of London romance I ever heard of." The Mendicity Society -which monitors the city's countless beggars - has brought in a man described in the official account as a "jet black blind beggarman." With him is a female companion, a young woman of respectable birth identified only as Eliza. The Society's Capt. Wood calls it "a singular instance of perverted taste."

Arrested outside a pub in Bishopgate, the beggar is identified as Mahomet Abraham, described as "particularly revolting," an extremely filthy man with long matted hair and ragged clothes. Onlookers note with disbelief the "remarkable contrast" with his accomplice. Eliza admits that she fled her family in a dispute over a relationship with a married man and she's been living with Mahomet for nine months in Whitechapel. She tells an incredulous courtroom that she has both respect and affection for her friend. All the while, she is holding his "greasy black paw." A letter from Eliza's father is introduced; he admits his relationship with his daughter had been a most troubled one and urges the court to separate her from "this monstrous loathsome being." Both Eliza and Abraham are ordered held on remand.

In the end, Eliza's father successfully beseeched the court to allow his daughter to emigrate and begin life anew. Reportedly, offers of marriage had come in from California and Australia. As for Mahomet, a bureaucratic hitch is all that prevents his deportation to his native Malay. He is released after a fortnight in jail with the warning, "You have been separated from your female companion, and you are never likely to meet with her again, and I advise you to drop that sort of business altogether."

The radical People's Paper commented critically: "We cannot but express surprise and indignation at its being considered "criminal" for a blind man, of another color, clime, and creed, petitioning for the assistance of the philanthropic in that country which has conquered his own, and plundered its inhabitants."

Illustration from Mayhew's London Labour & the London Poor
Posted by Tom Hughes at 9:31 AM