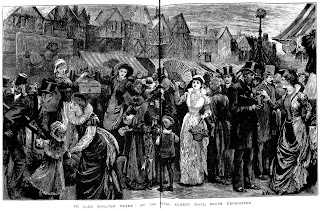 "A whole galaxy of the beauty, rank and fashion of the land," to cite The Illustrated London News, turns out for the opening of "Ye Olde Englyshe Fayre" to benefit the Chelsea Hospital for Women.  The interior of Albert Hall has been remade into a "quaint Elizabethan village."

The great attraction, however, is the sight of dozens of London peeresses and reigning beauties of the day dressed "very prettily" as peasants. To quote from the official program: "Ye appropriate Olde Englyshe costumes of ye ladies who preside at ye stalls, gives great effect to ye whole scene." From ersatz shops, Duchesses and Dames purvey flowers, fruits and produce. The Prince and Princess of Wales favor the event with their presence.

It must be said, however, that the opening day is a disaster. The Hall is completely overwhelmed by the crowds; the doors had to be closed periodically. Some less fortunate souls find themselves herded behind the makeshift village where they are left in "resigned stupefaction." Poor Countess Cadogan, at Ye Old Tea Shoppe, is praised for her "ineffectual but well-meaning efforts" to meet the demand for refreshments. So many toes and dresses are stepped on that inevitably, even among ladies and gentleman, there are scuffles. A reporter thought it was a "marvel of muddle, mistakes and mismanagement," resembling less an old English fair- than the old Irish one at Donnybrook. Lessons learned, things so improved it was decided to extend the three-day fair into Saturday and open it to the public. The tickets were nonetheless priced at a daunting five shillings to "filter the assemblage." In the end, the fair raised over £7500, a tremendous success.

Still, there were those who thought it all rather silly. Saying the event typified the "inherent flunkeyism of society," The Spectator sneered, "No one obtained any pleasure, and most returned fatigued, headachy, ill-tempered, and, with a few ridiculous trifles, purchased at exorbitant prices; but they had enjoyed a sight of the great ladies in preposterous costumes."  The "fancy fair" idea was soon copied by numerous charities. Punch called it "Ye Three Sham Dames of Olde," printed a mock advertizement for "A race between Dukes and Marquises in the Reserve Enclosure of St. James's Park, in aid of the funds of the South West Diddlesex Hospital for Decayed Donkeys."

Illustration from The Graphic
Posted by Tom Hughes at 10:08 AM