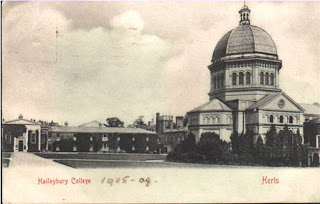 A Solomonic decision closes a dispute which had tarnished a respected public school.

Haileybury, just north of London, had been founded in 1805 to educate the sons of employees of the East India Company. Now open to the sons of City-men and other professionals, Haileybury had - of late - been plagued by thievery. The school proctor set a trap with marked money in a classroom cash box. One of the marked half-crowns soon turned up in the desk of a student named Henry Hutt.

Henry is a clergyman's boy and insisted upon his innocence. He had no idea whence the money had come. In a vain bid to coax a confession, the headmaster locked Henry in the infirmary for three days. Henry's brother, a Haileybury alum, was summoned. Charles Hutt had no luck and dismissed his brother as a "first class young liar."  Fortunately for Henry, his father was more sympathetic. When the boy was branded a thief and expelled, Hutt's pater sued for slander.

Represented by Sir Charles Russell, Henry held firm. His chief accuser was the prying proctor, Campbell, who had apparently unlimited powers to spy on young Haileyburians. Robertson, the headmaster, testified smugly that any jury would have convicted Henry. Yet the only evidence, the marked coin, had mysteriously vanished. After a 6-day trial, the jury delivers its verdicts:


Did Henry Hutt steal the money out of the cash-box in Study Number 17? --- A. No. [Cheers]
Were the Governors of the Haileybury School right in suspecting him of having stolen the money? --- A. Yes.

The Hutts settled for 100 pounds in damages and an entry in all school records that Henry had been acquitted of theft. For once, a headmaster found himself subjected to a public lashing; The Saturday Review found the conduct of the Haileybury faculty throughout "strange" and recommended that the "sinister" proctor's powers be curtailed and with it a return to "a little more manliness and common sense."
Posted by Tom Hughes at 11:30 AM