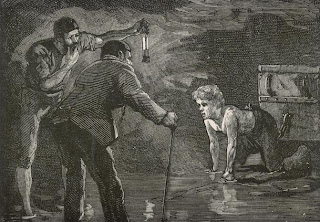 The great reformer Lord Ashley (later 7th Earl of Shaftesbury) rises in the Commons to denounce conditions in the coal mines as "perfectly intolerable [in a country] that professes to call itself Christian."

For two hours, he unflinchingly tells of women and children - some as young as five - who must work 16-hour days. One 6-year old, he says, "carried or dragged half a hundred weight fourteen times every day, a distance as high as the dome of St. Paul's Cathedral." Graphic woodcuts some depicting half naked
women at work in brutalizing conditions are passed around the House depicting the grim conditions and the all-too common results, stunted growth, maiming accidents, and premature death. Ashley calls for legislation banning boys younger than thirteen and all women from the mines.  "You may, this night, by a cheap and harmless vote, invigorate the hearts of thousands of your country people, enable them to walk erect in newness of life ... and avail themselves (if they will accept them) of the opportunities of virtue, of morality and religion."

The speech serves its purpose; The Illustrated London News declared: "The heart sickens and the blood burns [at] - for the purpose of most unhallowed gain - the stunting, grinding, and brutalizing of a far-spread race of English poor."

While the House of Commons was willing to act, the powerful mine-owning peers in the Lords lay in wait to gut any true refroms in the pits. One of them, Lord Londonderry attacked Ashley for even circulating such "disgusting woodcuts" in polite society. In the end, the reforms are minor; boys will begin working at ten and women will be restricted to no less difficult jobs on the surface. Ashley acceded, knowing the principle of government regulation had been established.

That summer, he went down his first mine: "Thought it a duty; easier to talk after you have seen."
Posted by Tom Hughes at 9:55 AM