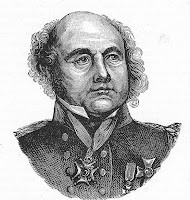 According to evidence found almost 12 years later, this is the day Sir John Franklin died on his quest for the Northwest Passage.

Franklin had been knighted for previous Canadian explorations.  He left in 1845 to "penetrate the icy fastnesses of the North, and to circumnavigate America." In 1847, with no word for a year, the Navy sent out the first of what became a sad series of fruitless search missions. In 1854, the Navy sought to have Franklin and his 128 men declared dead but Lady Jane Franklin, his widow, called the action "presumptuous in the sight of God ... indecent in the eyes of men." She abandoned mourning clothes and took to bright colors to demonstrate her refusal to give up hope.

In late 1854, Dr. John Rae came back with evidence purchased from Esquimaux and with the theory that "that our wretched countrymen had been driven to the last resource - cannibalism." Such speculation touched off a furious debate; Dickens, in Household Words, denounced the very idea as "dreadful." In 1857, when the Government cut off all public assistance to the search effort, Lady Franklin posted her own reward. In 1859, a team headed by Leopold McClintock brought back final word. They had found a canister in a stone cairn with a message urging the finder to bring it to the Admiralty in London. It said simply that Sir John had died 11 June 1847 aboard his ship and the survivors, under Capt. Crozier, set off on foot. A few skeletons were found, along with pieces of plate bearing Sir John's crest.

Lady Franklin was convinced, McClintock was knighted and a mournful public erected a statue in Franklin's memory on Waterloo Place only yards from and five decades before Sir Robert Scott's. In a bit of irony, it was Sir John who inspired Scott's eventual rival for the South Pole, the Norwegian, Amundsen. The latter, discussing Franklin's earlier Arctic travels, wrote: "Oddly it was the sufferings that Sir John and his men had to go through which attracted me most in his narrative. A strange urge made me wish that I too one day would go through the same thing."

In 1986, the bodies of two members of the expedition were found preserved - and fully intact! - in the perma-frost. Cause of death: tuberculosis & starvation.  The mystery of the loss of the expedition is unsolved.  For awhile, the blame was placed on the lead used to solder the tin cans containing much of the food for the voyage.  Newer studies shift the blame to the water on board the ships; it was distilled after being used to cool the railroad engines that powered the ship through the ice.
Posted by Tom Hughes at 9:02 AM