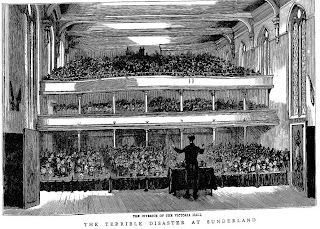 A heartbreaking tragedy occurs in Sunderland as a stampede at a Saturday afternoon children's show leaves some 200 youngsters dead. The Spectator calls it "The Massacre of the Innocents."

A traveling magician-ventriloquist named Alexander Fay had gone about the city for days promoting the show to be held at the 3500 seat Victoria. Hall. Balcony tickets at a pence apiece were sold to the poorer children, and investigators later figured there were 1500 in the balcony, which seated a thousand adults. At show's end, Fay began tossing toys and sweets into the crowd, but none reached the balcony. In a frantic scramble to get below, the children came upon a door locked open only wide enough to pass one at a time.

One of the first adults to reach the scene described it as one that "beggars all description. A mass of children, most of whom were dead, were piled one upon another to the height of 7 or 8 feet ... the stench of the atmosphere was something horrible." Troops from a nearby barracks are called to maintain order as distraught parents arrive to look for their offspring. For more than a week, mass funerals are held across the grieving city. Queen Victoria donated fifty pounds to the stricken families. She followed the "painful but very interesting" tragedy closely, requesting and receiving a photograph of the narrow doorway, scene of the crush. For the public, The Illustrated London News published a diagram of the Hall with a mark to indicate the site where the children died.

Fay's assistant, who testified at the inquest, admitted he was almost stampeded, finally hurling his basket to the ground and shouting: "There are no more toys. Go Home!"  The coroner, while critical of the entertainer, placed the greater fault elsewhere: "The managers deserve censure for not having provided sufficient caretakers... to provide order in the hall." The hall management promised that the obstructed doorway would be taken care of "forthwith."
Posted by Tom Hughes at 10:53 AM