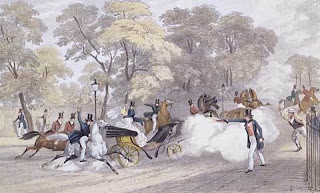 A young man fires two shots at Queen Victoria and Prince Albert, newlyweds of but four months, as they take an evening carriage ride from Buckingham Palace. After firing once to no effect, the gunman shouts, "I have another here," and produces and fires a second weapon. Again, he misses. The gunman is quickly subdued, indeed he has to be rescued from a frenzied crowd which crys, "Kill him! Kill him!"

Albert, in a letter to his grandmother, affects a rather blase attitude toward the frightening incident; he says his wife "laughed at the thing." As for the assailant, Albert writes, "His attitude was so affected and theatrical it quite amused me." Regardless, he quickly orders the carriage to drive on, returning to the Palace an hour later to "long and louds huzzahs" of a crowd drawn by the excitement. The Queen, carrying her first child, appears "extremely pale."

17-year old Edward Oxford, an out of-work waiter, whose rooms were strewn with revolutionary pamphlets, was found guilty but insane, and sent to an asylum where he languished until his deportation in 1867. He was closely questioned by members of the Privy Council amid rumors of a murder plot that would put Victoria's uncle, the sinister King of Hanover, on the throne. The 69-year old son of George III, the former Duke of Cumberland, stood next in line and had never made a secret that he lusted for the English crown for his son. The King was not well-liked, nor likeable, for in his day he had been rumored to have dabbled in everything from murder to incest. He left England after William IV's death to accept the consolation prize of the Hanoverian throne.  The Duke of Wellington advised him, "Go instantly and take care that you don't get pelted."

While Albert had his suspicions, few could believe the dim-witted Oxford could be involved in any assassination plot and The Times dismissed such rumors as "too glaringly monstrous for any man in his senses to entertain." However, Prime Minister Melbourne cajoled Parliament to agree to a Regency under Prince Albert in the event the Queen's untimely death left an underage heir to the throne.

Painting of the scene now in the Guildhall Library.
Posted by Tom Hughes at 10:24 AM