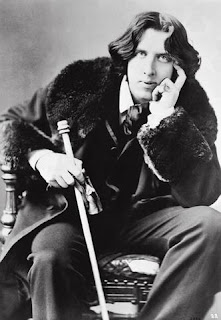 Oscar Wilde arrives in New York City for his first lecture tour of the United States. Expectant reporters hire a launch to meet the S.S. Arizona in the harbor and are rewarded for their efforts with a private interview.  Wilde confesses disappointment with the voyage, "I am not exactly pleased with the Atlantic. It is not so majestic as I expected. The roaring ocean does not roar." At Customs, Oscar quipped, "I have nothing to declare (an appropriate pause) except my genius!"

THE NEW YORK TIMES scribe found the 28-year old Wilde "a not particularly active, athletic young man" who laughed in "a succession of haw-haw-haws."  Gilbert & Sullivan's newest operetta, Patience, in which Wilde is lampooned as "Bunthorne," mincing down Piccadilly with an omnipresent lily in his hand, is a Broadway smash.  THE NATION is disappointed with the original: His extravagance is not extravagant enough to amuse the average American audience. His knee breeches and long hair are good as far as they go; but Bunthorne has really spoiled the public for Wilde."

Wilde's first lectures in New York and Boston are well-received. At Harvard, he was met by dozens of students dressed in their "aesthetic best," and drew cheers when he quipped, "Caricature is the tribute mediocrity pays to genius."  In an itinerary that took him as far west as San Francisco and as far south as Savannah, Georgia, Wilde was hissed off the stage in Rochester, swindled by a Wall Street con-man named "Hungry Joe" Sellick, unimpressed by the fabled honeymoon spot at Niagara Falls ("The sight of the stupendous waterfall must be the earliest, if not the keenest, disappointment of American married life.") and informed in Atlanta that under no circumstances could his black manservant travel in the same railway car with him.

He returned to England in December having earned and spent a small fortune. He docked in Liverpool ready - as always - with an epigram for the quayside press: "The English and the Americans have everything in common except, of course, their language."
[Photographed in 1882 by the Amercan Napoleon Sarony]
Posted by Tom Hughes at 1:31 PM