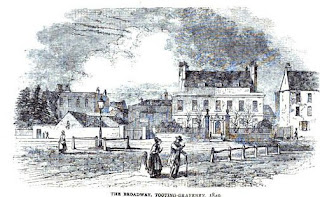 Health officials order the immediate closure of the Infant Poor Asylum at Tooting, south of London.   The healthy children were removed.  The dead are buried, four to a coffin.  In a week's time, 52 children died at the asylum from cholera.

Operated by Mr. Peter Drouet, the asylum is home to almost 1400 children, housed in space for perhaps half that number.  Pestilential conditions are blamed for the outbreak and jack-booted navvies must clean out a filth clogged drainage ditch which runs between the children's home and the adjacent Surrey Lunatic Asylum,  The ditch "emitted a most offensive odor."  At first, investigators express the "highest opinion" for Drouet who had long advertized for the unwanted poor infants of London, offering care for a mere four shillings a week.  However, the death toll in Tooting continued to mount.  Soon, the total reached 180.  The coffins remain stacked in a churchyard until the frozen ground can accept them.

A coroner's jury hears grim testimony from several of the older children who described having no heavy clothing for the winter, no clean linens, and the daily fight for the scraps from a slop bucket for dinner.  In the end, the jury finds that the deaths were attributable to "inefficient diet, deficient warmth of clothing and impure air."  Drouet is charged with manslaughter and was ably defended by a future Lord Chief Justice.  The counsel argued that the children sent to Tooting were so sickly to begin with, even heroic efforts would not have saved them when cholera is raging.  Across England, the outbreak had taken over 16,000 lives.  "No human foresight," argued defense counsel, could have prevented the tragedy.  Despite what The Times called "indescribably sickening" testimony, Baron Platt, the judge directed that Drouet be acquitted on all charges.

Drouet wept.  "Affected tears," though Charles Dickens, who condemned the school in a letter to The Examiner:  "Brutally conducted, vilely kept, preposterously inspected, dishonestly defended, a disgrace to a Christian community and a stain upon a civilized land."  The school did not re-open.  Drouet died that July, the cause being given as heart disease and dropsy.

[Sketch from The History of Tooting; the large house in the center was Drouet's.]
Posted by Tom Hughes at 10:42 AM