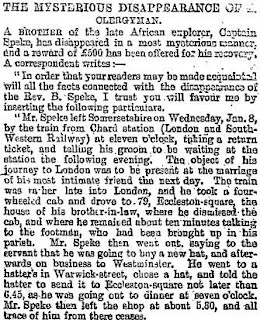 The Rev. Benjamin Speke, whose disappearance from the heart of London had given rise to great fears (and/or ribald speculation) is found alive in distant Cornwall.  The brother of the famed Nile explorer, John Speke, the clergyman is the rector of a small parish in Devon. On 8 January, he came to London to officiate at a wedding but vanished within hours of his arrival. The only trace was his crumpled hat found in Birdcage Walk, St. James Park. A £500 reward brought in no helpful information.

Londoners wondered fearfully how a vigorous 35-year old man could be abducted from the shadows of Westminster without anyone so much as seeing or hearing a thing. The police take the usual criticism for failing to solve the case or find a body. The less reverent suggested that the cleric had lost himself in the sinful pleasures of the great city. Even his friends suggested he suffered from a mania of some sort which led to "his unwillingness to marry."

All becomes clear in Padstow, when police stop a suspicious bullock driver. In his case, they find numerous disguises and religious writings and the man confesses to being the missing parson. Rev. Speke - described as being calm, composed but dejected - explains that he had hoped to go somewhere where he would not be known, to preach the Gospel to the laboring classes. For weeks, he wandered the Channel coast, reading his Bible on the rocky beaches. A policeman told the Press that Speke "seems to entertain peculiar religious views."

While the Rev. Mr. Speke is apologetic, The Times is quite vexed; the paper chastises the cleric for causing "poignant distress" among his friends while having "terrified the more timid part of the public." Placed in the custody of his family, Rev. Speke was back at his church outside Ilminster by mid-April, "with the permission of his medical advisers."

He conquered that unwillingness to marry.  In 1881, his wife died and he drowned himself the following day. The local paper noted that the Reverend suffered from "hypochondriasis in a very depressing form."
Posted by Tom Hughes at 7:26 AM