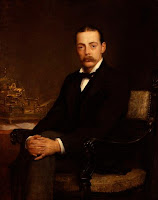 Lord Randolph Churchill dies in his Mayfair home after a long, public battle with the unmentionable disease, syphilis. The story varies. One version has it that Churchill contracted the disease while at Oxford: he awoke, after a night of revelry, in bed with an old whore with "one long yellow tooth in her top jaw that waggled as she spoke." Or was it a Parisian mistress?  Regardless, syphilis is a disease that destroys in stages, offering long periods of remission and apparent health.

The first serious onset came in 1881. A promising MP, Churchill was married and the father of two sons.  He quit public life for several months and, it is assumed, all physical relations with his wife as well.  The disease returned in 1886, the year when Churchill's career peaked as Chancellor of the Exchequer.  Ravaged by mood swings and heavily drugged with digitalis, Randolph's behavior became increasingly combative.  He vexed his colleagues and - over a minor point - suddenly resigned his office.  He was now being treated by a renowned London specialist, Dr Buzzard (!), but no treatment could halt his decline.  The resignation effectively ended any major role he might play in serious politics.

After 1886, his infrequent appearances in the House of Commons were painful to behold.  After one such rambling, slurred effort, the Parliamentary correspondent for The Times stated that he had witnessed "nothing more tragical ... in our generation."  In Lord Rosebery's poignant phrase, Lord Randolph was "chief mourner at his own protracted funeral."  An 1894 world tour was disastrous. In Japan, Randolph tried to strangle his valet.  In India, his physical collapse was near total.  His final weeks in London were spent in great pain.

When the end came, the cause of death was listed as "general paralysis of the insane," the unstated left understood.  Winston, his eldest son, recalls racing across snow-covered Grosvenor Square to reach his dying father's bedside.  Ever the defender of his father's memory, Winston Churchill died on the same date, seventy years later.

[Illustration from The National Portrait Gallery]
Posted by Tom Hughes at 3:18 PM