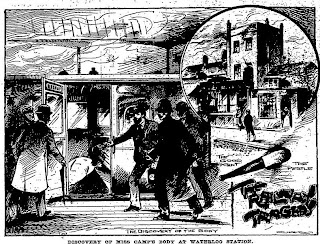 A young fruiterer's clerk, Edward Berry, awaits the arrival of his fiancee's train at Waterloo Station. Miss Annie Elizabeth Camp, a waitress at the Good Intent Tavern in Walworth, is expected on the 8:23. In the station lobby, Berry asks a guard on the platform of the London & South-West Railway if the train from Hounslow is in. "Oh, yes," comes the response, "Dead on time." An unfortunate phrase considering that Miss Camp is found savagely beaten to death, her still-warm body stuffed beneath a seat in a 2d-class compartment.

A distraught Berry identifies the body. In his hands, he is clutching a pair of never-to-be-used music hall tickets.  Miss Camp had not been sexually assaulted. Her purse with only petty cash is missing but not her jewelry, including earrings and a pretty brooch. A man's bone cuff link, found in the blood-spattered compartment, is the only clue to the killer. The brutal crime was committed on one of the busiest rail lines and stuns Londoners. Women are especially shaken, noting that Annie - at 33 and weighing close to 200 pounds -was a formidable woman.

The L&SW line was much criticized for its niggardly £200 reward. The first break in the investigation came a few days later when a bloody chemist's pestle was found on the tracks between Putney and Wandsworth; the blood type matches Miss Camp's. The illustrated papers carry sketches of the fiendish weapon and of a mysterious "moustachioed man in a frock coat" who disembarked at Vauxhall and seems to have disappeared. As always, police quizzed Berry closely but his alibi held. The landlord at the Good Intent denied a rumor that Miss Camp had spurned his attentions.  A London barman named Brown, who had been previously engaged to Annie, had a solid alibi.

Annie's funeral draws a much larger crowd than expected for a women of her station, the curious and ghoulish, no doubt. A glass hearse, drawn by four horses, made its way to Norwood Cemetery. An inquest ran on for six weeks but produced only a verdict that Annie Camp had been the victim of "wilful murder by persons unknown." The tragedy was thought to be a "fearful warning to the thousands of good looking women whose circumstances oblige them to go about alone in London."

Her murder was never solved.

(Sketch from the Penny Illustrated Paper)
Posted by Tom Hughes at 1:35 PM