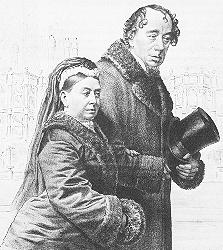 The Queen and her Prime Minister, Mr. Disraeli (now Lord Beaconsfield), exchange Valentine's Day greetings. Her Majesty's message is by way of cheering her embattled first Minister whose six-year Government is on the verge of collapse. Her card features a "young Valentine" reposing on a sunny bank.

Disraeli responds with his typical elegance: "Lord Beaconsfield, no longer in the sunset, but the twilight of existence, must encounter a life of anxiety and toil; but this, too, has its romance, when he remembers that he labours for the most gracious of beings!"

The close relationship between Monarch and Minister is one of the treasured themes of the period. Disraeli called her his "Faery Queen." During one of her illnesses, he reminded her, in the required third person, "He lives only for Her, and works only for Her, and without Her all is lost." Yet, keep in mind Disraeli's famous remark to the author Matthew Arnold: "Everyone likes flattery; and when you come to royalty you should lay it with a trowel." Regardless, the Queen accepted it all. Lytton Strachey observed: "Like a dram-drinker, whose ordinary life is passed in dull sobriety, her unsophisticated intelligence gulped down his rococo allurements with peculiar zest."

Not long after the Valentine's Day exchange, Disraeli's Tories were swept from power in a General Election that returned to power the Queen's hated Mr. Gladstone. She wrote a farewell note to Disraeli: "You must not think it is a real parting. I shall always let you know how I am & what I am doing, & you must promise to let me hear from & about you."

Now in his late 70's, Disraeli could not have found his political retirement unwelcome. He had little more than a year to live. He wrote a friend, "I love the Queen - perhaps the only person in this world left to me that I do love."
Posted by Tom Hughes at 1:50 PM