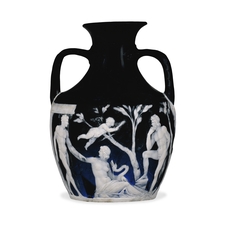 Late on a Friday afternoon, the peace of the British Museum is literally shattered when a man, using a chunk of granite, suddenly smashes the Portland Vase.

Considered the "most admired of all the admired" items at the museum, the treasured piece is left in a thousand fragments. Originally known as "the Barberini vase," it had been unearthed near Rome and purchased by the Duke of Portland in 1810 for just over £1000. The vandal - who made no effort to escape - refuses to give his name, hoping "not to involve others in my disgrace." He is soon identified as William Lloyd, in his early 20's, from Dublin.

At his arraignment, Lloyd admitted he had been drunk for most of the previous week and was suffering from "nervous excitement and fear." He freely admitted his action, but insisted he meant no malice but simply acted from delirium. He urged the judge to hand down the harshest possible penalty, for it is "really deserved." However, since the vase is of inestimable value, Lloyd can only be charged with smashing the glass case which contained it. Incredibly, he is fined three pounds. When an anonymous donor paid the young man's fine, Lloyd was speedily released from the Tothill Fields gaol.

The outrage is almost universal; Parliament is encouraged to act in great haste to remedy the law. The Illustrated London News frets: "There are many more fragile artifacts in the Museum to which a fit of delirium tremens and a lump of stone may be fatal."  Over at Punch, the editors envision squadrons of "swells" roaming London's museums, smashing the crockery and slashing the canvases: "It is possible that this sort of amusement may supersede the hitherto aristocratic amusement of breaking windows and wrenching off door-knockers. A morning's lark in the National Gallery would be cheap at £30, if half a dozen were to club together for the purpose."