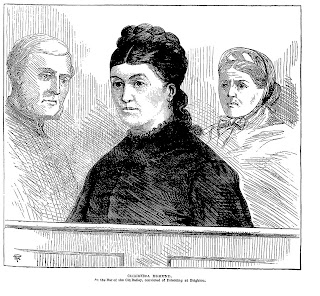 43-year old Christiana Edmunds, the so-called "Brighton Poisoner," is spared the noose; instead, she will serve out her days in the mental asylum at Broadmoor.

In the summer of 1871, a 4-year old boy had died eating some chocolates laced with strychnine. Miss Edmunds came forward at the child's inquest to charge that she had earlier tried to warn the police after purchasing some tainted candies herself from a local sweet shop. The "chocolate creams" had been so obviously tampered with, however, that the candymaker was cleared and the case was left open.

A 20 pound reward brought forward a chemist who thought Miss Edmunds might be the "Mrs. Wood" to whom he'd sold large quantities of strychnine, supposedly to kill cats ravaging her garden. As police probed further, they uncovered a motive for murder in  a pathetic romance. Miss Edmunds had become infatuated with Dr. Charles Beard, a prominent doctor who lived with his wife on the Grand Parade.   Feigning ailments, Christiana insinuated herself into the doctor's care. She visited his home, wrote him "Caro Mio" letters until, at last, Mrs. Beard expressed her displeasure. As a peace offering, Miss Edmunds brought by some chocolates.  Mrs. Beard actually felt forced to eat one.  The scheme failed and her intended victim was merely sickened.

Miss Edmunds, then frantic to divert suspicion from herself, sent a street urchin out to purchase some more chocolates.  She found fault with them in some way and had the boy return them to the store --- but not before she placed some lethal sweets in the box.  As a result, 11 year old Sidney Barker had died and several other locals were sickened.

The trial was moved from Brighton to London's Old Bailey owing to the public rage at such callous plotting. Insanity is the only defense: Miss Edmunds' mother swears that the family is "saturated with lunacy." The accused's father and brother had both died insane. Nevertheless, the prosecution portrayed the accused more as a woman with "powers of great connivance and considerable cunning."  The jury returned a speedy guilty verdict and urged that no mercy be shown.  The Brighton Daily News was pleased: "After all, what is death to an insane person."  At word she would be hanged, Miss Edmunds collapsed in the dock, claiming to be carrying Dr. Beard's child.  The charge was disproven after an examination done by a jail matron.  The test had to be delayed when a bailiff, sent off for a stethoscope, returned with a telescope.

In the days following the trial, a petition was sent to the Home Office signed by many prominent Brightonians, including some physicians.  They appealed for mercy on the grounds of the family history of madness.  The Home Secretary commuted the sentence.  The Times disapproved: Miss Edmunds deserved to hang for her "acts of cold-blooded indifference to life ... mark the most vicious and cruel form of criminality."
Posted by Tom Hughes at 6:05 AM