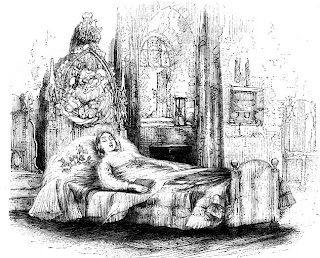 Countless tears are shed across Britain at the death of dear Little Nell.  Her passing takes place in the newly published final chapters of Dickens' Old Curiosity Shop. The final scene is as famous - or infamous - as anything in Victorian literature:


She was dead. No sleep so beautiful and calm, so free from trace of pain, so fair to look upon. She seemed a creature fresh from the hand of God, and waiting for the breath of life; not one who has lived and suffered death ... Dear, gentle, patient, noble Nell was dead.

Dickens had struggled mightily: "I am breaking my heart over this story," he told a friend. Dozens of readers wrote him begging that Nell be allowed to live. His close friend Macready, England's greatest actor, after reading the final pages, wrote the author, "I have never read printed words that gave me so much pain." It seemed everyone was grief-stricken. Lord Jeffrey, one of the nation's leading judges, was found openly weeping by a friend, "I'm a great goose to have given way so, but I couldn't help it." The Irish champion, Daniel O'Connell threw his copy across the room, more in disgust than grief, claiming Dickens "had not sufficient talent to maintain Nell's adventures... so he killed her." When English ships reached American ports, people stood on the dock shouting, "Is Little Nell dead?" Sales of Dickens' struggling journal Master Humphrey's Clock rose to 100,000, many of them soon tear-stained.

For early Victorians, the open expression of grief was not anything to be ashamed of. By the latter stages of the century, however, the reaction had set in. Fitzjames Stephens wrote that "so many foolish tears had been shed" over Nell. It was Oscar Wilde who had - as he often did - the best line: "One must have a heart of stone to read the death of Little Nell without laughing." Sophisticated 20th Century readers no doubt scoff at the cloying sentimentality of it all, yet the Journal of Popular Culture published a paper- "Erich Segal as Little Nell, or the Real Meaning of 'Love Story.'"

Dickens returned to the death of an innocent youth in Dombey and Son and again his readers sobbed at little Paul's demise. Not all.  In 1861, Augustus de Morgan (who?) wrote:


A splendid muse of fiction hath Charles Dickens,
But now and then just as the interest thickens
He stilts his pathos, and the reader sickens.

(Illustration: The Death of Little Nell by George Cattermole.
Posted by Tom Hughes at 12:26 PM