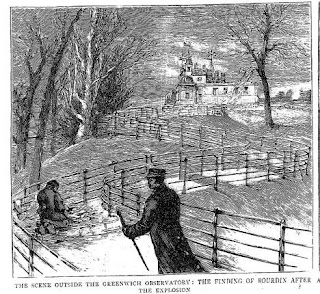 Less than fifty yards from the Royal Observatory at Greenwich Park, a bomb explodes prematurely killing a young French anarchist.

Some passing schoolboys are first on the scene; they find the man kneeling and bleeding. A park ranger arrives to hear the horribly mutilated man mutter, "Take me home." Taken instead to a nearby hospital, he dies within the hour. The man was soon identifed as 26-year old Martial Bourdin, born in Tours, now living in London and described as "an ignorant sad little fanatic of a tailor." His brother said Bourdin would only occasionally talk politics and seemed to hold no anarchist views. Yet Scotland Yard quickly traced the dead man to the Autonomie Club, in the Tottenham Court Road, the headquarters in exile for anarchists and terrorists from across Europe.

The Club had recently issued a manifesto which proclaimed, in part, "In a struggle like this we hold that all means - however desperate - are justifiable." The incident stuns Britons who had felt themselves safe from the wave of anarchist violence that was sweeping the continent. The Times hopes that police will be much more vigilant in tracking such "cosmopolitan desperadoes," adding, "It is possible to carry the theory of 'liberty for everybody on British soil' a little too far." In Paris, where an anarchist had recently thrown a grenade into a crowded cafe - a grenade traced to the Autonomie Club - the French press sneers at the "tardy awakening of conscience" across the Channel, now that the bombers have struck closer to home.

Scotland Yard undercover agents raided the Autonomie two days after the Greenwich Park explosion questioning the inhabitants but confiscating nothing more dangerous than copious quantities of anarchist pamphlets. Bourdin's funeral in Finchley was a "silent and melancholy" affair. A large crowd actually hooted and stoned the modest funeral procession. No graveside speeches were allowed.

Joseph Conrad used the Greenwich incident, loosely, in his novel, The Secret Agent.

(Sketch from The Graphic)
Posted by Tom Hughes at 5:58 AM