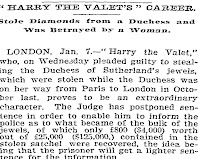 William Williams, or Johnson or Johnston - he was a man of many aliases - pleads guilty to stealing a jewel case belonging to the Dowager Duchess of Sutherland.  The thief was known to police as "Harry the valet."

The gems had been pilfered at the Gare du Nord in Paris, vanishing from Her Grace's unattended 1st class coupe-de-lit while she said her au revoirs on the platform.  Estimated value: 25,000 pounds (2.5 million in 2010)  Weeks passed with no sign of the jewels and no demand for ransom. Finally, Scotland Yard - acting on a tip - went to a grimy flat in the Fulham Road where they found their old friend Harry but recovered only about 1000 pounds of the stolen stones.

The thief had been betrayed by his mistress, a actress, married to an army officer.  Maud Richardson Andrews admitted to police having had an affair with Harry in Paris; it ended when Harry's money ran out.  A few days later, the Duchess' case was stolen.  Harry contacted Mrs. Andrews again to assure her that he now had the means to provide her with all she required.   Reunited, Harry and his mistress lived it up in Paris.  She daringly wore some of the pilfered gems.  Once back in London, Harry sought out his underworld contacts from Houndsditch to Hatton Garden hoping to convert the stones to cash.  Flush with funds, Harry proved unable to control himself.  He gambled away a large sum in Soho.  Following an argument with Mrs. Andrews, he struck her.  She got her revenge by tipping the Yard.

Harry was quite loquacious in the nick; he boasted that he had done "twenty bigger hauls" in his day.  At his trial, however, Harry's lawyer tried to portray him, not as a super-thief, but a love-sick chump who gave in to "sudden temptation."  To no avail.  Harry's sentencing was delayed in hopes he would bargain in return for leading police to more of the missing jewels.  Harry crowed that he would not reveal his associates even if he had to go to jail for life.  He got seven years.

Led away, he told his warders, "You would not have got me if it had not been for the woman. I was a fool."