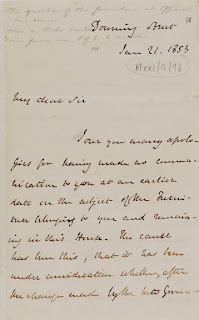 The antipathy between the two leading statesmen of the Victorian era, Gladstone and Disraeli - is a well-known fact.  It can be well illustrated by a petty squabble that began on this date over the ceremonial robe traditionally worn by the Chancellor of the Exchequer.

Mr. Disraeli had been Chancellor for a year but, with the fall of Lord Derby's Tory government, he must leave the post to his rival Gladstone.  The latter had been named to the post by the new Prime Minister, Lord Aberdeen.  Addressing Disraeli as "My Dear Sir," Gladstone opens the correspondence discussing the transition and concluding with a reference to the aforementioned robe: "I shall be very happy to receive it from you ... I remain, my dear Sir, faithfully yours, W.E. Gladstone.

Disraeli did not even deign to reply for several weeks.  In late February, with the more formal heading, "Dear Sir," Disraeli made no mention of the robe. Gladstone, reciprocating the chill, answered with a "Dear Sir" letter of his own. "I adverted at the close of my letter to the Official Robe, but the allusion to it has perhaps escaped your attention. I remain, dear Sir, faithfully yours, etc."

After another week's delay, Disraeli answered, now in the third person, avoiding again any mention of the robe and concluding frostily, "Mr. Disraeli is unwilling to prolong this correspondence."

Now a fully exasperated Gladstone, certain that he would never see that wretched robe, signed off bitterly, in the third person as well: "It is highly unpleasant to Mr W.E. Gladstone to address Mr Disraeli without the usual terms of courtesy, but he abstains from them only because he perceives that they are unwelcome."

Gladstone was forced to reach into his personal "exchequer" to purchase a new robe for the office.  The interested may view Mr. Disraeli's robe on display at Hughenden Manor, his Buckinghamshire estate.

[Letter photocopy from the Bodley Museum, Oxford]
Posted by Tom Hughes at 8:44 AM