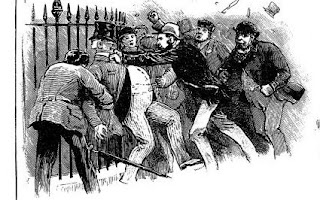 "King Mob" rules the West End. A bitterly cold winter had idled thousands of dockworkers and building tradesmen. A coalition of Radical groups draws 20,000 people to a rally in Trafalgar Square. Among the speakers is the Eton-educated Socialist H.M. Hyndman who calls upon the crowd to march with him through the West End with the cry of "Work, Bread, or Blood."

The noisy but peaceful protest turned violent in Pall Mall.  At the Carlton Club, retreat of the hated Tory capitalist, a clubman appears in a window holding his nose in disgust at the crowd.  The response is immediate. Almost every window in the building is smashed. Nearby, Raffini's Tonic Wineshop is looted with predictable result. At Goode's in Mayfair, the windows and the ceramic art on display are left in pieces. Mr. Goode says it would have been worse but for the cowardice of the mob which flees at the first sight of a pistol. Carriages are overturned, occupants terrorized.

It is ninety minutes before Scotland Yard can mobilize its forces to shepherd the weary and wobbling miscreants home to their less salubrious neighborhoods.  Mr. Harcourt, the Home Secretary, admitted the police had been "culpably off their guard." For days, London remained on edge; many merchants refused to re-open their stores amid rumors of vast armies of "the unwashed" readying a renewed offensive on "Property." Press reaction is quick and harsh. The Saturday Review claims the rioters weren't workmen at all, but "the class of loafers who are unemployed for the simple reason that they have never done a day's work in their lives."

The Queen, quick to blame it on Mr. Gladstone, admonished her Prime Minister that "steps, and very strong ones" had to be taken to prevent of recurrence of what she called "a disgrace to the capital." She couldn't have been happy when Hyndman et al stood trial and were acquitted, affording additional opportunities for Socialist rhetoric in the dock.
Posted by Tom Hughes at 1:23 PM