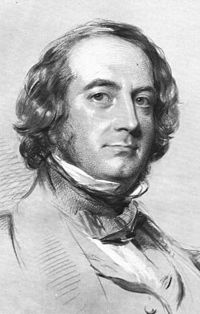 The social and literary world mourns the death of Baron Houghton at the age of 76.  He was born Richard Monckton Milnes. A wealthy dabbler in politics, poetry and criticism, Lord Houghton, according to The Times, "will be remembered more for his encouragement of genius than his possession of it." The Saturday Review mourns, the loss of "perhaps the best after-dinner speaker of his time," for it was said that no gathering was complete without "Dicky" Milnes. He won the nickname, "Cool of the Evening."

Unsaid in any obituary, however, is that Milnes will be remembered for being one of the foremost erotologists of all time. His country seat, crumbling Fryston Hall in South Yorkshire, was known as "The Aphrodisiopolis." The place was so drafty that Tennyson dubbed it "Freezetown" Hall. The Complete Peerage notes that his library was "by no means virginibus puerisque," i.e. for little girls and boys. He established an ultra-secret reading group, The Philiobiblion Society for like minded gentlemen. In fact, it was Milnes' complete set of the works of the Marquis de Sade which is supposed to have sent Swinburne off to the "birching parlors" of St. John's Wood.

Milnes' "procurer" (who often shipped the material home in a diplomatic pouch) was Frederick Hankey, a truly unlikeable Englishman living in Paris, who collected items of sexual torture. According to Ian Gibson, the historian of such things, Milnes did more than merely collect but also fulfilled his many sexual fantasies.  He patronized London flogging brothels and was the likely author of The Rodiad, a classic of the flagellation school.

Milnes married late in life; Disraeli described him as "unfortunately short" with a face that resembled a "countenance cut out of an orange." Once an ardent wooer of Florence Nightingale, Milnes finally married a peer's daughter and raised three children. Among other less celebrated acts of kindness attributed to him, Milnes quietly saw to it that Arthur Nichols' curate's salary was supplemented so as to allow him to marry Charlotte Bronte.

The explorer Burton, who had been helped by Milnes both in his travels and in the publication of some of his more salacious translations, wrote at his patron's death, that Milnes "never said an unkind word, never did an unkind deed."
Posted by Tom Hughes at 11:32 AM