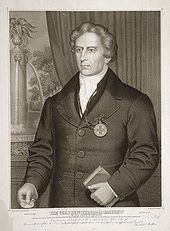 A crowd of roughs does its best to disrupt a Blackheath rally held by the Irish temperance campaigner, Father Theobald Mathew.  The Capuchin friar's message was "Ireland Sober is Ireland Free."

Father Mathew is touring England amidst great curiosity, having claimed that fully one-fourth of his Irish countrymen had taken "the pledge" not to let liquor cross their lips again. He crossed the Irish Sea for a series of mass rallies, rewarding newly-vowed tea-totallers with a little tin medal. In Liverpool and Manchester, he drew huge crowds.  In London, the dour frock-coated priest is entertained at a politicial breakfast where his remarks are so persuasive that one oft-sozzled peer barked, "Damn me, I will keep sober—for this night."

On this day, running behind schedule, Father Mathew arrives in Blackheath to a much less hospitable reception. The crowd numbers 20,000 including, by now, a small but vocal group of drunks. The local brewing interests had well-oiled their goons with free ale and porter available within sight of the speaker's platform. The hecklers, including several Royal Marines, make it impossible for the priest to be heard.  The crowd, according to The Times reporter on scene, made "the most hideous noises imaginable." Wearing badges proclaiming themselves members of "The Malt and Hop Society," with pewter tankards around their necks as their "medals," the mob charges the stage, driven off by Mathew's shillelagh wielding defenders. But Mathew opts to abandon the field, leaving Greenwich having administered the pledge to not more than 600 people.

Returning to Ireland, Mathew's movement was slowed by poor health , waning interest and the horros of the famine years. He toured America with similar success.

His last years were spent in poor health.  When the Queen was asked to provide him assistance with a pension from the Civil List, she demurred:  "He has done much by preaching temperance, but by the aid of superstition, which can hardly be patronized by the Crown."  The government eventually alloted him £300.