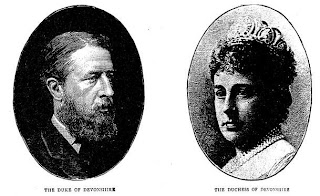 At Christ Church, Mayfair, the 8th Duke of Devonshire (formerly the Marquis of Hartington) marries the widowed Louisa, Duchess of Manchester.  Despite the lofty social position of the bride and groom, as The Times brief account noted, the ceremony "took place very quietly."

For years, the two had carried on a discrete affair, acknowledged by society. The New York Times, allowed more candor from abroad, described them as "inseparable companions," and reported: "It is perfectly understood that the Devonshire has remained a bachelor all these decades on her account." The late Duke of Manchester, whom Disraeli wrote off as a "well-intentioned bore," had been a mari complaisant and absented himself accordingly. When he finally passed away, Louisa's future became the topic of general speculation and re-marriage rumors were frequently floated.

While he lived, the 7th Duke of Devonshire - Hartington's father - disapproved of the relationship between the Duchess and his son.  The 7th Duke believed that widows ought never re-marry. But then the old Duke of Devonshire died in 1891 and Hartington had the title at last.  Of his wedding plans, he wrote his sister: "I am sure that we shall both be much happier when the friendship which has so long existed between us is openly recognized."

Although nicknamed "Harty-Tarty" from his randy days as a young Marquis, Devonshire's phlegmatic personality is legendary. In Parliament, he yawned during his maiden speech, and stopped another to make the aside, "This is damned dull." He often quipped that his greatest moment came when his pig took the ribbon at the Skipton fair. Ironically, he might have captured his romantic prize at a much younger age had he been a more ardent wooer. Hoping to jar her  lover from his "customary indolence," Louisa flirted with the future Duke of Manchester. As we know, her scheme misfired.

Together, finally, the new "Double Duchess" entertained lavishly at London's Devonshire House and the magnificent family seat at Chatsworth, showing more ambition for higher office than the Duke. Often mentioned as a possible P.M., Devonshire never took the highest laurel.
Posted by Tom Hughes at 3:04 AM