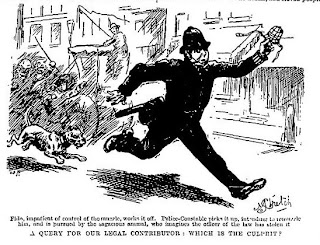 Queen Victoria takes action in defense of "Her dear poor friends, the dogs." She demands that there be no repetition of the infamous "Baker Street mad dog case."

London is in the midst of another outbreak of hydro-phobia; as rabies is then known.  The victims of a rabid dog's bite, while they complain of desperate thirst, simply cannot take water. While M. Pasteur's work continues in Paris, British doctors are sceptical of any imminent cure.  In the meantime, the Metropolitan Police had recently proclaimed that all dogs must be muzzled or under control at all times.  "Any dog abroad and not under proper control would be seized by the police and dealt with according to law."

In June, a Baker Street woman had let her spaniel out, muzzled, as required by law. The dog, teased by some children, began barking vigorously, loosening the muzzle. Two constables, attracted by the commotion, chased the dog for several blocks, cornered the frightened animal and proceeded to beat it to death with their truncheons. Miss Fannie Revell, an angry neighbor who doused the officers with a bucket of water, took her story to the Press and Palace: "How long is this ridiculous tyranny, and the still more ridiculous panic which initiated it, to continue?" Sir Charles Warren, the Commissioner of Police stated that the officers had acted "perfectly rightly" and without cruelty.

While the Queen's love for animals is well-known, this case surely touched poignant memories. The ill-fated Baker Street spaniel was named Dash, the very name of the Queen's pet spaniel of long ago: "DEAR SWEET LITTLE DASH," whom she rushed home to bathe after her Coronation, 48 years before.

In her memo, the Queen demands:
1. No dogs should ever be killed by police unless the veterinary surgeon declared they were mad. That dogs who were close to their masters or mistresses or their house doors, poor quiet dogs, should be left alone and not molested.
2. Dog's Homes should be augmented and enlarged. (She was a frequent contributor.)
3. Muzzles, except [for] very savage dogs, should not be used, nor should dogs be run after and hunted to be caught..
At the end of the message, sent to the police without comment, she adds briefly: "Cats should likewise be well cared for."
Posted by Tom Hughes at 12:21 PM