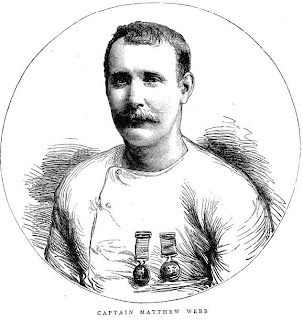 At 12:55 p-m, Captain Matthew Webb, a surgeon's son from Shropshire, wades into the waters off Admiralty Pier in Dover to begin his bid to become the first person to swim the English Channel. He is 27 years old and has been a swimmer since the age of seven.  An officer in the merchant navy, his feats were well known.  He'd swum the new Suez Canal and rescued crewmen in the Atlantic.  He stands 5-foot-8 with a "capacious" 43-inch chest.  The late summer-weather conditions are ideal, the sun is shining, the Channel is calm, and the water comfortable at 65 degrees. He is accompanied by two boats; one carrying his coach and tidal strategist, Captain Toms along with a supply of beef tea, beer and brandy, and in the other, journalists to record the event.

At midnight, word is relayed back to London by a passing ferry that Capt. Webb swims on and is in "capital spirits." But after sunrise, within sight of shore, a tidal change pushes a tiring Webb back out into the Channel. A young lad named Baker, dives in from the supply boat, to provide encouragement for the final strokes to the shore. Webb recalled that the final few hours were "cruel work," his eyes were burning from the salt water and he was stung by a jellyfish.  But just after 10:30 a.m., Webb makes landfall at Calais, too weak to stand. It has taken 21 hours 45 minutes.

After some cod liver oil and a fish dinner, he took a nap.  He returned by yacht to Dover to find himself a national hero.  The Times hails him for giving the lie to the charge that "the manly type" has disappeared due to the "enervating influences of modern civilisation."

The captain's feat prompted a fad in distance swimming; people began plunging into rivers and canals across Britain, often with fatal results. In fractured verse, Punch urged its readers:


Now, Jonathan, let Webb's exploit drive none of you too frantic,
So as to lead to more than talk of swimming the Atlantic!

For several years, Webb told and retold his tale on the music hall stage. Interest inevitably waned and in July, 1883, Webb hoped to rekindle his popularity by swimming the rapids above Niagara Falls.  He seemed to be swimming strongly but he suddenly went under. His body was not found for several days and then five miles below the rapids.

No one was to match his Channel swim until 1923.

Illustration from The Graphic
Posted by Tom Hughes at 5:48 AM