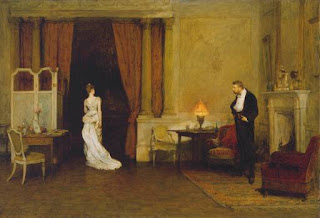 For the first time since Henry VIII, Parliament approves a change in Britain's divorce laws with the passage of the Matrimonial Causes Act.

Heretofore, divorce was available only through the Ecclesiastical Court, with grounds limited to non-consummation and other such rarities, or through the long and prohibitively expensive process of seeking a private Act of Parliament. The new law creates a civil Divorce Court. The husband fares better, he must only prove adultery on his wife's part. Wives must prove adultery plus aggravating circumstances, anything from desertion to bestiality.

The bill was the subject of bitter debate. The Bishops, of course, led the fight in the Lords, assisted by such men as Lord Redesdale who suggested that the happiness so typical of British marriages could be traced to "the almost impossibility of dissolving them." In the Commons, Mr. Gladstone argued that easing the path toward divorce is a step "towards a laxity which Christianity does not recognize." When opponents threatened a rare filibuster, Prime Minister Palmerston told the House, "I have been told, 'You will never pass this bill!' I replied, 'Won't we?'" He vowed to keep Parliament sitting through the grouse season, prompting yelps from the back benches. Gladstone accuses his former and future leader of "vicious" conduct. In the end, the opposition wins only minor concessions, such as a clergyman's right to refuse to perform marriage where one or both of the parties is a divorcee.

The divorce courts are quickly busy. Newspaper accounts, explicit in detail even by modern standards, so shocked the Queen that she wrote to the Lord Chancellor comparing them to "the worst of the French novels [and] most pernicious to public morals."

The first judge of the Divorce Court was Sir Cresswell Cresswell who was unmarried.  A Manchester Man, writing in the Quarterly Review, thought that was most wise: "He has no ugly prejudices, no reminiscences, pleasant or unpleasant, to stand in the way of equitable decisions. He has no dread of a curtain lecture at night for dealing heavily during the day with some erring one who might have attracted his wife's pity. Besides, a judge who has just left a scolding wife, depend upon it, does not assume composure with his wig."