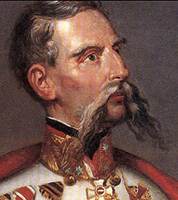 September 4 --- (1850) --- In Southwark, the Austrian General Baron von Haynau, receives a most unfriendly welcome from the locals. Nicknamed "General Hyaena" or worse "the Butcher," Haynau is a villain in the eyes of the more radical British working classes for his heavy-handed suppression of rebellions in Hungary and Northern Italy; dozens of rebel men were hung and their women publicly flogged.

While visiting London, Haynau asks to tour the sprawling Barclay & Perkins Brewery. Recognized by the workmen on his arrival - his infamous moustachio gave him away - the General is met with an angry crowd of workers, including burly draymen and carters. Shouts are heard, "Pitch him in the Thames," and "Let's give it to the woman flogger." A truss of straw dumped from above nearly hits Haynau, who is soon the target of all manner of missiles. Fearing for his life, Haynau and his small entourage bolt to a nearby Bankside public house, the George, "to the utter astonishment of Mrs. Benefield, the landlady." Taking refuge in a locked upstairs bedroom, Haynau escapes via a rear window to a police boat for a ride back to his hotel at Charing Cross.

The Queen demands that Foreign Secretary Palmerston send an apology for "a brutal attack and wanton outrage committed by a ferocious mob on a distinguished foreigner of past seventy years of age." Palmerston reluctantly complied, adding a note that Haynau's visit to England was ill-advised. Barclay & Perkins
refused to discipline its workers and the Baron's name was expunged from its guest book.


The New Police came just in time,
(Tis said they're sometimes slack, man)
And rescued him cover'd with bruises and grime,
And carried him off in their smack, man.
With rage and fear he did glare and grin,
Says they "You are well away, man;"
"And don't let us catch you here agin,"
Says Barclay and Perkins' Draymen.