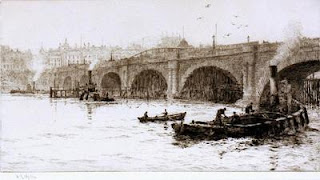 On a fine, late summer evening, a well-dressed young woman, climbs the parapet on Waterloo Bridge, and throws herself into the Thames. Though her intentions are obvious, when she hits the water the woman begins crying for help. A police launch is there in minutes but the unfortunate woman cannot be saved. On the bridge, a handbag is found containing a ha'penny, a pawn ticket for 2 shillings, a wedding ring and a locket with "the picture of a gentleman."

For days, the body lay unidentified at the morgue. Finally, a Shadwell landlady reported a tenant had gone missing and had left behind a suicide note. She was able to identify the body as that of an American woman named Alice Blanche Oswald. In her note, Alice disclosed she had been in Britain but nine weeks. She had been taken on as a nursery governess with a family in Wick, in the far Highlands. Soon, however, she was dismissed; her employer even refusing to pay for passage home. The cost of the trip to London alone left her with a mere 5 shillings.

Her note continued: "Now I am destitute, every day is a misery to me. No friend, no hope, no money; what is left? Oh, God of Heaven! have mercy on this poor helpless sinner! Thou knowest how I have striven against this; but fate is against me. I cannot tread the path of sin, for my dead mother will be watching me. Fatherless, motherless, home I have none. Oh, for the rarity of Christian hearts! I am not mad; for days I have foreseen that this would be the end. May all who hear of my death forgive me, and may God Almighty do so, before whose bar I must soon appear! Farewell, to all, to this beautiful and yet wretched world."

Alice Oswald was just 20 years old. She had apparently sought help from the American consulate. In fact, her landlady reported that on the day of her death, Alice had received a letter from the Consulate which seemed to upset her. Alice was buried at the Necropolis in Woking, a memorial to the "kithless kinless orphan" was paid for by a committee "chiefly composed of American ladies."

She remained a mystery as did her heartless employer. While Alice's story created "great excitement" in Wick, The Dundee Advertizer could find no trace of her: "It is generally supposed that some mistake must have been made as to the name of the town."
Posted by Tom Hughes at 7:56 AM