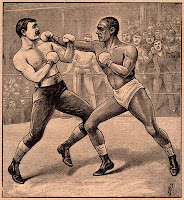 Disgruntled Soho residents, displeased by the noisy, all-hours antics at the Pelican Club, file a complaint asking that the club be closed as a public nuisance. The Pelican had opened in 1887, and quickly attracted the rich and notorious.

Gambling and drinking are the main offerings with emphasis on the latter; the unwritten rule is that the bar is open as long as anyone has any money left. That brings to mind a third specialty of the club, dodging creditors. One Captain Fred Russell, whose debts were considerable, was dubbed "Brer Rabbit"'to mark his evasive skills. He once managed to have himself (under an assumed name) hired by the firm that had been dunning him. He chased himself around England expenses paid - and reported back that the Captain had fled the land.

Such "gentlemen" partied late; bands blared sometimes til sunrise. When the club does close, tipsy toffs spill streetward, whistling for cabs and setting off loud and profane arguments among the cabmen for the fares. Making matters worse for the neighbors, the Pelican had taken to hosting boxing matches, often with American "colored gentlemen" matching fists with local talent.

The attorneys for the club skillfully but vainly prolonged the action, hoping to tire or break the bank of their foes. The proprietor argued that Gerrard Street had always been a "late" street, home to many after-hours clubs; perhaps the noise is coming from the Italian Cooks and Waiters Club next door? The music, insisted a clubman piously, is no louder than a Salvation Army band. It took until December before a judge granted the neighbors a partial victory; he ordered an end to all boxing and further, directed that no cabs may be hailed between midnight and 7 a.m. The Times chortled that the ruling "robs the weary Bohemians of their cabs during the very hours in which they are accustomed to seek their beds."

The Pelican closed its doors in 1892 but lives on in P.G. Wodehouse's creation, Sir Galahad Threepwood; the old "Pelican," who after a "thoroughly misspent life .... holds his whiskey & soda aloft like some brave banner beneath which he had often fought and won."
Posted by Tom Hughes at 4:05 AM