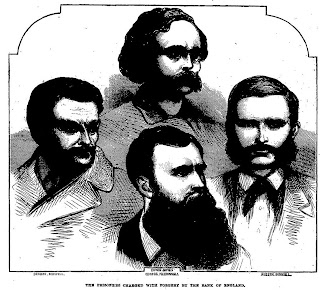 Four Americans are tried at the Old Bailey for the audacious Bank of England Forgeries. The mastermind of the plot is George Bidwell, a veteran con-man and thief, joined by his younger brother, Austin, and the Harvard educated but New York trained forger, George McDonnell.

After modest trial successes against banks in Brazil and Liverpool, the three men settled in London for the big heist. Investing their own money, they set up Austin as "Mr. Warren," a wealthy U.S. railwayman, with forged references and letters of credit. He opened a sizeable account at the Bank's West End branch in Burlington Gardens, Mayfair. A fourth man, Edwin Noyes, arrived from New York to pose as Warren's secretary. Meantime, McDonnell - using letterheads and bank forms pilfered across Europe by George Bidwell - began the printing of quite artful but bogus "checks."

The schemers struck in late January; it was surprisingly easy. No one at the branch questioned the distinguished new customer, not even when Warren or Noyes took their withdrawals in gold. Laundering the money through another London bank, the proceeds - which soon topped £100,000! - were converted into U.S. Bonds. With roughly two months before the dishonored checks would be discovered in the slow, gentlemanly world of banking - the forgers worked quickly. Too quickly to avoid a fatal error.

On 28 February, amid several bills of exchange presented by Noyes were two that a clerk noted were undated. They were drawn on a Mr. Blydenstein in the City; upon inquiry, that gentleman denounced them as forgeries. When Noyes returned to the bank, he was arrested. The conspirators scattered; McDonnell was taken in New York, Austin Bidwell in Havana, and brother George in Edinburgh. At one point, George tried to catch a steamer to the States but dockside police scared him off; the ship sank, hundreds drowned.

Trial security is unprecedented; London buzzed with rumors of a jailbreak. Several warders were sacked for fraternizing with another Bidwell, John, who'd been buying drinks at the local. After eight days and ninety witnesses, the jury takes fifteen minutes to convict. In remarks before sentencing, Austin Bidwell apologizes to the bamboozled Bank manager, "Any other man in London, however able ... would have been deceived in the same way."

Justice Archibald, declaring that the serious threat to British commerce merits "terrible retribution," hands down four life terms. Still, the plotters won many admirers; especially McDonnell, who defended his craft from the dock, "Forgery is a very wretched, unhappy, miserable and contemptible art [but] an art nevertheless."

Sketch of the guilty foursome from The Penny Illustrated Paper
Posted by Tom Hughes at 4:07 PM